Welcome back to Survivor! Supposedly Nick found a second idol on the side of a raft, but Davie isn’t totally sure, and thinks that maybe he just pulled out his original idol to trick people. So, he’s still looking for it, or any type of ribbons or scrolls.

“If Nick got two idols, he can go all the way and beat us all,” Davie says. He needs help making sure Nick is out, and goes to Christian. Christian is especially glad, as Nick isn’t in his corner. So, he needs to make sure another threat leaves the game. 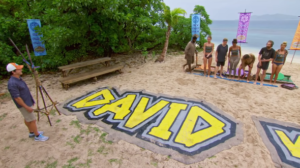 But right now, it’s time for the reward challenge. The Survivor contestants will have to race over and under a series of obstacles, and knock shit over with sandbags. Winners will get a helicopter ride to Fiji and go to a restaurant with a varied menu. Sliders! Surf and Turf! I bet Jeff Probst eats there every night, the lucky bastard.

Davie is the first to get to his sandbags, with Alison and Angelina behind. But Alison can’t throw, like… at all, so she’s not really a threat. Nick comes up from behind and throws sandbags like a pro. I don’t even know where Christian is right now. He hasn’t been mentioned at all during this challenge.

Nick and Davie both have one block left, but Davie knocks all of his blocks off first. “That was a shootout!” Probst says. He says Davie can choose one person to go with him, and he’s feeling the pressure. “I have to base my decision on the people I’ve been closest with the longest,” he says. He picks Nick, since Nick picked him for the family challenge. But he gets one more choice.

Angelina mentions how she got the rice for the tribes, since she won’t shut up about it. But, he chooses Kara instead. Embarrassing. She can’t help but think “Davie’s playing the field,” and thinks it may very well be a million dollar mistake.

Speaking of the rice, that’s what she got to eat back at camp. She admits to Alison that she’s legitimately pissed. “I can’t believe that Davie would choose Kara over me,” she says. But once again, she doesn’t want to use her wonderful act as currency.

Davie thinks there’ll be an opportunity at the reward for just him and Kara to talk, and when they do that, he’ll talk about trying to get Nick out of the game. Davie thinks they can pair up with Alison and Christian to get Nick out. “This sounds like a feasible plan that’s absolutely going to take my game to the next level,” Kara says.

Alison does the one thing she’s asked not to do, and talks to Mike White about it. Mike White is torn, since he’s been close with Nick since Jabeni, and they’ve been through a lot.

Davie is still looking for an idol, and ends up finding a clue to an advantage. He needs to get to the end of the beach, all the way at the other side of camp. The advantage is an idol that can only be used at the next idol, unless he gives his vote and plays the mini urn smash game. He talks over all of his options out loud, and it’s kind of weird. He decides to call on God, and aks God if it’s in his will to play the game. He looks at the wind and the fire, and says he probably won’t play. Okay then.

It’s time for the Immunity Challenge! Of course, if you’re a fan of Survivor or my Survivor-themed headlines that say things like “Immunity Challenge” to help break up the text, you’re probably well aware.

This challenge involves balancing a ball on a disc. The disc also can’t touch their body. The Survivor cast, er, survives the first round. Now it’s time for the second, where they’ll be two balls! Let the jokes begin, Probst. “Mike’s ball starting to move,” he says, before saying that both of Angelina’s balls are separating.

Kara is the first one out, with Angelina following.  We’re down to five! “What is worse, balls separating or balls clinging together?” Probst says. Oh my god. Every time.

Both of Davie’s balls drop, and now we’re down to four. Er, three. Christian had a dangling ball. Now it’s between Alison, Mike, and Nick. Nick drops. Good.

The third and final round includes — you guessed it — three balls. Alison is trying to overcome her wobbly legs. But it’s Mike who ends up winning — it’s his first immunity win, and frankly, I’m a little surprised.

Nick thinks that it should be Christian who’s out, but it needs to be Alison — she’s a huge threat, and the time is right. Mike, geeking out, is still gunning for Christian. But, everyone else is all about Nick. 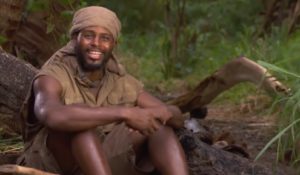 Nick admits to Davie that the idol he found at the raft was actually fake. “Now that he’s told me the truth, I don’t want him out of the game!” Davie says. Now he thinks it needs to be Alison.

Mike White tells Nick that Davie is gunning for him, based on the idol. Nick can’t believe that Davie took him on that challenge. But, now Nick is against Davie, not Christian. His plan backfired. “It’s really hard to keep a group together when they all have their own agenda,” Mike says.

Now it’s time for tribal council! Angelina talks about leaning on others, and trust. Davie calls it all a “mind frenzy.” Can I be real with you?  I hate this part. Unless someone says something to get someone else to change a vote. Anyway. Speaking of, it’s time to vote. Jeff goes to tally them, and dear god, if it’s Christian, I’m going to be pissed.

Davie plays his idol, simply because he has to. And Nick decides to play an idol as well, but his fake one. He wanted to get a read on people to see what they’d think. It’s a little embarrassing. Still, he plays his real idol for himself, just in case. It’s a tie between Alison and Christian, and…UGH IT’S CHRISTIAN.

He tells everyone they played a good game, and man. I’m livid. I mean, I felt like this would happen, but… sigh.

If you liked this recap, hey — thanks. Consider following Best Recap Ever on Twitter (@bestrecapever) and on Facebook to help support the site.