It’s finale-time for This Is Us, and Mandy Moore allegedly said that this episode wouldn’t produce a ton of tears. I bet I can prove you wrong, Mandy Moore!

The beginning of the episode has a glimpse of “Old Jack” at a vow renewal with “Old Rebecca.” Obviously, this is a fantasy sequence, right? The wedding scene is actually Kate’s, who admits to Toby that her father’s urn will be present at the big day, which is kind of meaningful. She’ll also be wearing his old Daytona t-shirt for her “something old.”

Toby’s parents will be coming in, and Toby makes sure to tell Kate and Kevin that his parents are somewhat of a nightmare. With that, he kisses Kate goodbye and says that the next time he sees her, it’ll be down the aisle. Kate asked Kevin if he thinks their dad would have been okay with having the wedding at the cabin, and with a smile, Kevin said he thinks he would have loved it.

Deja is not super happy about the wedding, and Randall says he misses the old Deja. Y’know, the Deja before her mom gave up parental rights. Randall and Beth try to think of worst-case scenarios, and the one they end up with is both Tess and Deja ending up on the pole. Randall and Beth are great.

Rebecca chats with whats-his-face (sorry, Miguel) about Kate and the wedding, and says that she fears she’s a walking reminder of Jack. Miguel rightfully tells her that he’s probably the walking reminder, and Rebecca is all like, “yeah, you’re right.”

After Kate realizes the Daytona t-shirt is missing, Kevin and Randall call Toby — who’s in the car with his parents — to ask where it is. Toby realizes that he forgot to pack it and feels terrible about it. Toby’s parents figure it’s just a t-shirt, but it’s way more than that. It’s a Jack reminder!

Since they’re great brothers, Kevin and Randall say they’ll try to round up more of their dad’s things. After all, Jack was more than a t-shirt. Also, his urn is going to be there, right? Thank god Toby didn’t forget the urn. 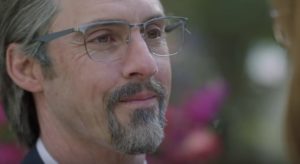 Flash forward to Jack and Rebecca’s vow renewals. Jack talks about Big Three Homes and refers to Rebecca as a light. At least, I think so. The whole thing was so beautiful that I didn’t jot it down. I had one job!

Kevin and Randall try to find t-shirt replacements and decide that having Kate walk down the aisle with a baseball bat is probably a bad idea. Rebecca walks in and gives Kate a hug, just before Kate walks out and says she has to run an errand. Rebecca asks if anyone else can do it, and it turns out, they can’t. It’s because Kate wants to take a trip down memory lane. She goes into an ice cream shop and asks if they still serve the banana pudding flavor. It was Jack’s favorite, and an “old tradition.” But unfortunately, the shop changed over a few years ago, and the closest they have is banana coconut. It’s just not the same.

At the saddest vow renewal ever, Rebecca decides to sing “Moonshadow,” which is the song she was singing when she first met Jack. Jack dabs his eyes as he’s watching the performance next to Kate. In real time, the bridesmaids are getting their makeup done. Rebecca notes that she tried to call Kate, but it went straight to voicemail. Is it possible her phone is turned off?

Since Randall and Kevin are wonderful brothers, they look for Kate at the ice cream store first. And they actually get ice cream. Kevin says that losing the bride on her wedding day is probably the worst solution ever, and Randall decides to play the “worst case scenario game” with Kevin. It works for him and Beth, so maybe it’ll work here too. Randall’s worst case is that they have to tell Toby the wedding is off, and he has a heart attack and dies. Kevin can’t believe it got so dark. Obviously he’s never watched This Is Us before.

“What if after dad died, I got so absorbed in my own life…that I stopped looking out for my sister?” Randall says. “What if, uh. What if she spent so much time taking care of me that she stopped taking care of herself?” Kevin says back. He is not feeling better after all this worst case talk.

At the vow renewal, Kate shares a dance with Jack. But in the present day, Kate is driving her car. We’re not sure where.

What’s Up With Deja?

Beth asks her cousin Zoe to chat with Deja a little bit. Since they’re close like sisters, getting to know Deja is important. Her cousin tells Deja that she made her family’s lives miserable growing up, but then one morning, she just “forgot to hate ’em.” “Hating the people who love me” no longer made sense to her. It seems like Deja may have appreciated the chat.

Toby’s busy getting ready for the wedding when his parents walk in and say they have concerns about Kate. “It feels like you’re constantly bending over backward to calm her,” his father says. His mom, Wendie Malick, thinks she might be “unstable,” especially because Kate had broken up with him before. His dad held his tongue with her first wife, Josie, and doesn’t want him to head down that path again. Toby says he’s the unstable one, and he’s “unstably in love with Kate Pearson.” Cute, right? He doesn’t even know she’s missing! 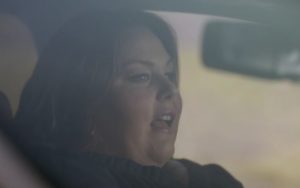 Kate calls her mom, finally, and tells her that she keeps having dreams about a vow renewal. “You’re so beautiful, and dad is older and grayer, but still dad,” she says. “You know, the way it was supposed to be.” Rebecca tells her it sounds beautiful and notes how weddings can be so emotional. She asks what Toby was doing in the dreams, and it was probably making her laugh. Kate says Toby wasn’t in them and asks if that’s bad. While Rebecca tries to assure her it’s not, Kate hangs up on her like a twelve-year-old. What a wedding to remember!

With the urn in her purse, Kate stops the car and has a flashback. She’s sitting at that exact location with her dad. Holding the urn, present-day Kate has a heart-to-heart with her dad. She says that while Toby isn’t in the dreams, she knows he’s the guy for her. “Dad, I’m getting married today, and I’ve got to make room for Toby,” she says. “I’ve got to let go.”

With that, she unscrews the urn. Cut to her bro’s waiting for her, telling her she’s glad she had her moment. So I guess Jack’s ashes are now out in the woods somewhere? Okay.

Beth’s cousin got Deja to change out of a hoodie for a wedding, and hooray! “Good lord, I love my baby cousin,” Beth says to her while embracing. 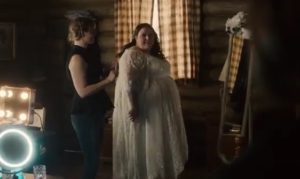 Seeing Kate in her wedding dress, Rebecca thinks she looks beautiful. “I want today to be perfect for you,” Rebecca tells her, sad that she angered her on the phone earlier. Kate says that all she ever wanted was to be like her — a singer, a mom, and someone who had such a strong marriage. “You are not in my way, you are my way,” she says. Oh, tears. That was sweet.

Flashback to Kate asking Jack if she can marry him someday. Jack laughs. How does one respond to that, you wonder. “Sorry baby, that’s not really how that works,” he said “One day, a long time from now, you’re going to meet someone who’s better than me,” he says. For the record, let’s just state that Toby is just fine, but he’s not better than Jack. Maybe better at board games, but.

Toby’s mom greets the girls and says that Tess and Annie look just like Beth, but Deja looks just like Randall. Kind of awkward.

Cut to Kevin’s toast. “My brother and I have been going a little bit crazy the last couple of days,” he said. They wanted to make the day perfect for Kate since that’s what dad would have done. “If he were here, he definitely would have looked at you and said, Katie-girl, in your life, you’ve never looked as beautiful as you do right now.” He says the four of them should take a deep breath together, and let it all out. Weird for a toast, but very sweet. “Toby, Kate, I love you both so much,” Kevin said, apologizing for his toast being weird. Next, he introduces Randall. There are only two minutes left, so I can’t imagine how Randall can fit this all in.  If This Is Us has taught us anything, it’s that Randall likes a good monologue.

Randall’s speech talks about him at first? Have these guys ever been to a wedding? There’s a flash forward about Kate asking Toby about meds, and Kevin on a plane with Zoe, Beth’s cousin, which we’ll probably learn more about next season. Also flash to Old Randall, telling Old Tess that it’s “time to see her,” even though neither of them are “ready.” Is it Deja, who ended up flipping out? Is it Beth? Why didn’t this wedding focus on Toby and Kate’s love like, at all? We’ll have to wait until Fall for more This Is Us.