Welcome back to Survivor! This season, it’s David vs. Goliath. Or as Jeff Probst makes it sound, “losers” versus “people who have had the best life ever.” Or, “geek who works with robots” versus “person who states people would take bullets for them.” Ugh, really? Like, I don’t want to even know if anyone would take a bullet for me. It’d bum me out. But anyway, yeah — welcome to Survivor!

The gangs arrive via boat. All the Davids on one, all the Goliath’s on another. It’s the 37th season, and Probst — who still won’t acknowledge me on Twitter, by the way — talks about how Survivor is an enduring matchup with a bunch of unknowns. The tribes are just called “David” and “Goliath,” by the way.

Nick, a David, grew up in a trailer. He was the first one to go to college, so he learned by doing. Now, he’s a public defender! And he also has two degrees. Gabby, another David, says they have a lot more to prove. They’re starting at the bottom and have a way cooler story.

Now, the Goliaths reveal their buffs. Also, I already hate the Goliath tribe. One person on the Goliath side actually says he’s the “mayor of Slamtown.” He’s a wrestler, but still — gross. Allison, who comes from a family with a legion of support, just wants people to know that she’s still an underdog. To prove this wrong, Probst talks to a David named Pat who came from a paycheck to paycheck family. He has a paralyzed mother. Allison’s family was filled with doctors. So LOL, shut up Allison.

Probst wants the Goliath group to try and pick the weakest man and woman on the David side. They choose “purple hair and Big Bang Theory.” Ouch. Purple hair is from Puerto Rico, and Big Bang — named Christian — mumbles something about appearances. The strongest from Goliath are the Mayor of Slam Town and Allison. 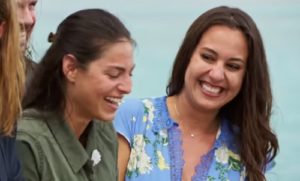 The four of them are going right into a challenge, which includes balance. Setting it all up is really confusing. Pretty much, they all have choices in the challenge, and the winner will get a massive shelter making kit. And David wins the challenge. In your face, meatheads!

But, that doesn’t mean the show won’t poke fun at Christian. He talked about his puzzle making algorithm so much that the show pretty much made cuts in his dialogue to prove he was on for a while.

So, holy crap — Mike White is on the show? He created School of Rock! I knew he looked familiar. He’s a Goliath. I thought I hated everyone on the tribe, but not him. The rest of the tribe talks about their weight gain and losses. Dan, a cop, used to tip the scales. Then he lost about 100 pounds in a year. “Now, the most beautiful girls tell me I’m good looking!” he says.  Things already spark between him and Kara.

On the David tribe, our heroes are setting up their shelter and not hooking up. Pat is acting a little bossy, calling someone a dirty bitch and talking about his left nut. But he’s also helping with the shelter, so everyone’s kinda-sorta just dealing with it.

Alec from Goliath starts to panic, as it’s obviously going to rain and the Goliath tribe isn’t done with their shelter. Natalie is especially worried since she’s in her late 50’s and everyone else is in their 20’s. She is accustomed to being in charge, but in this game? She’s not. Industrial engineer Natalia admits that Natalie isn’t afraid to tell people what she thinks. “She definitely put a target on her back,” she says.

Jessica, a waitress, is 19. But the rest of the tribe think she’s 22. That’s oddly specific. Maybe she openly lied, but if so, it was in order to be taken more seriously. Fingers crossed Jeff Probst doesn’t out her if any of the challenge rewards feature beer.

Gabby and Christian are pretty much kindred spirits, both being nerds. Maybe they’ll find love! “I definitely was drawn to Christian,” Gabby states. Christian noted they had to hide how well they got along and admitted that everything was just platonic. But this is only episode one. They’re way better than Dan and Kara.

The Mayor of Slamtown talks about his many wrestling nicknames but states he’s playing the game as himself. And he’s Jon. Or John. I could look this up, but let’s face it — he’s Slamtown now. 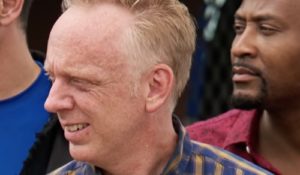 Mike White goes out to look for an idol, and everyone notices he’s missing. Jeremy says that Mike has a target on his back since he also did The Amazing Race and wrote movies, so he obviously has money. Natalie tells him he was gone too long, and Mike gets worried that he made a rookie mistake. If he gets voted out first, fingers crossed I make it through this season. Goliaths suck.

It’s day two. The David tribe is still setting up their shelter, and they’re already struggling. Elizabeth notes that the Davids tend to care about other Davids. Goliath people likely just think about themselves. Well, Nick might be a little shady. He said he didn’t want to waste his energy on the shelter and was all about plotting and scheming. He starts an alliance with Elizabeth called Thoroughbreds and tells the camera he plans on making a ton of alliances with a ton of different names. Nick’s laziness is quickly noticed, especially by truck driver Carl who “can’t stand lazy-ass people.”

Over at Goliath, everyone decides to look for the idol. Like, literally. John — I mean, Slamtown — says that looking for idols is in a Goliath’s DNA. It’s Dan who ends up finding it. “Finding this idol is a Goliath moment for me,” Dan states. Even better, he found it with the two most beautiful girls in his tribe!

Davie over on Tribe David finds an octopus, and how cool is that? Everyone is psyched. Davie calls himself a “blerd,” or, a black nerd. So catching an octopus is huge. “Is this real?” he asks.

The rain makes everyone talk about their feelings. One guy on David had a mom who overdosed three years ago, and everyone’s super supportive. It’s like one big therapy session. Surely over on Goliath, they’re having a push-up contest or something. 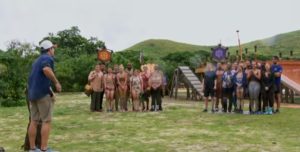 This challenge involves a pole vault, which I bet will trip up at least one person. Not only are they battling for immunity, but they’re also battling for fire. Goliath is ahead, but since the last thing to battle is a puzzle, David is still in this. Rain pours down, as Christian and Allison try to communicate with the rest of their team over the numerical puzzle. Still, David loses. Major bummer.

The weather is absolutely terrible before tribal, and something awful happens. Pat needs medical treatment ASAP. He claims he can’t focus, and worries about his back. On the way back to camp, their boat slammed down on a wave and everyone on David heard a massive crack. “We all groaned because it means that something really bad has happened,” a tribemate said.

Jeff Probst stops by and says it’s very unusual, especially since they’ve never had someone get hurt on a boat ride home. Pat, who can barely say much, pretty much states “you can’t take me,” stating he can’t leave. Unfortunately, he gets pulled from the game. “This can’t be the way it goes,” Pat says while breathing into a plastic bag. The team feels bad for him, even though he was one of the two that might have been voted out. Probst makes sure to remind him that he’s not quitting Survivor. Since, we all know how much Probst hates people who quit Survivor. Still, the whole thing is super weird. All of a sudden, Pat is a hero on David. Gabby cries since she totally misjudged him and he was the center of camp.

“Man, expect the unexpected every day out here,” Probst, emotionless, states to a crying tribe. But, Pat would want to see them all succeed, and now there’s no tribal council. Also, they get a flint! Elizabeth states that today was one of the most draining of her life, and as a Team David member, that’s pretty sad.