Y’all ready to cry? The third season of This Is Us is here, and just in case you forgot, here’s a recap — Kate had a miscarriage, Jack loves Rebecca, Deja had mom stuff happen and she smashed a car with a bat, and Kate and Toby tied the knot. And now, it looks like Kate and Toby are trying again for a child.  But since Kate’s been diagnosed with PCOS, it may be a little more difficult.

Deja’s mom went to court and gave up parental rights, and Deja gets to hear that her father also isn’t objecting. “He made it clear he wants no part,” Deja’s mom says. Heartbreaking. 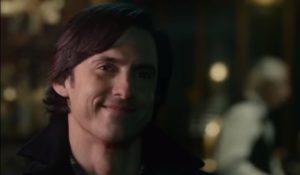 Flashback to Rebecca singing “Moonshadow” at a bar. It’s the moment Jack falls in love with her, and even other people in the audience can tell that Jack is truly smitten. After the show, Jack takes Rebecca to a place called Ray’s, where Rebecca says she’s been putting her demo out there. “I feel like I’m talking too much,” a nervous Rebecca says, asking Jack a little about himself. Jack states his name is Jack. After the date, Jack states that he’s met “THE Girl.” Not just a girl. He borrows money to help show her the night of her life, even if it’s just a few bucks. Dudes, you might want to watch and see how Jack turn like, nine dollars into something romantic. This could be the “Ted Mosby Minute Date 2018.”

Deja is having flashbacks, likely of her father. She’s back with the Pearson family, and they’re all celebrating Randall’s birthday. That means it’s also Kate and Kevin’s birthdays, much like other season premieres past. Beth is positive that Kevin is having sex with her cousin Zoe, and Beth wants Randall to stop it by saying she’d “kill” him “in the face” if Kevin admits it’s true.

Speaking of Kevin, he’s busy doing promos for his new movie, which he’s still a little afraid to see. He gets a call from Beth’s cousin, who states she’s pretty sure Beth knows. Beth is, after all, like a bloodhound. He says there’s no way he can’t go to his own birthday party (especially since there’ll be a gluten-free cake there!) but the two set some rules. Like, no half smiles.  Half smiles lead to full smiles, and Beth will totally know.

Kate and Toby talk to a professional about a possible pregnancy. Not only does Kate have PCOS, but Toby also has a low sperm count. The doctor says that she doesn’t want to take the two of them on since even with IVF, there’s a big risk for Kate due to her weight. “We want to take our chances,” Kate says. But due to liability issues, it’ll still be too dangerous. “I know it’s difficult,” the doctor states.

The party’s about to start, and Beth can tell from the first second that her cousin is “knockin’ boots” with Kevin. Beth’s good, man. Kate and Toby also arrive, and Toby seemingly has a “moment.” Or at least, he reflects on something. It’s short. Randall is busy showing Deja the building where he met his own biological father for the first time. “I found him, then I lost him all over again,” he monologues. Oh, Randall. I’ve missed you. 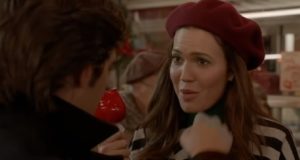 But back to Jack and Rebecca’s date! Rebecca asks Jack about siblings, and Jack admits he had a brother who died in the war. “I had no idea,” Rebecca says. Things get a little tense and awkward. To reset, she thinks they should answer questions at the same time. Like, cats and dogs. Or, mushrooms or pepperoni. They keep answering differently. Then, it starts raining and Jack doesn’t want to admit he’s too broke to buy an umbrella. Things are bad.

Speaking of bad, Randall’s kids straight up ask Kevin if he’s dating cousin Zoe. Kevin divulges he dated Jennifer Love Hewitt for less than a year, while Beth and Zoe are yelling at each other about the arrangement. 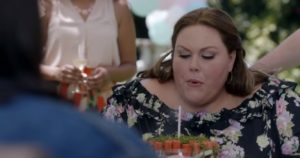 Kate, trying to stay positive, tells people that her weight is a lot like a black cloud that follows her around, even though she’s lost weight. Is it to blame for her miscarriage or the reason she can’t have a kid? “When is the universe going to give me a damn break?” she says.

Deja and Randall have a heart to heart, where Randall says Deja is exceptional and said he missed talking to her. Deja has really been giving him the silent treatment. Or maybe Randall just isn’t giving Deja any opportunities to talk? It doesn’t stop Deja from escaping from a window and confronting her father in the one place she remembered him working — a bike shop. Thankfully, he’s still there. He takes one look at her and knows. She opens up to him and has a bit of a Randall moment.

But, back to the awkward date. Jack is trying so hard to recover things but ends up driving her home. Before she steps out, Jack admits he couldn’t pay for the umbrella. “That left me with $2,” he said. If he bought the umbrella, he wouldn’t have enough for games. “You don’t bring a girl to a carnival and not let her play any games,” he admits. “I’ve been having a hard time since I got back,” he said. “Making money, and finding my place.”  He says talking about the war and his brother makes him sad and angry, but he very much enjoys talking to Rebecca. She makes him feel like home. “I’m sorry for such a lousy first date,” he says. “I’m really very sorry.” Rebecca checks to make sure it’s a “hard no” on cats, and Jack mentions he’s allergic. But mushrooms are straight up terrible.

But it’s okay, since then they kiss! First kiss! Rebecca wishes Jack a good night and smiles as he watches her walk up the steps. He also realizes she left something behind in his car — a maneuver she joked about just a little earlier.

Beth approaches Kevin about the whole Zoe situation. “She will break you, Kevin,” Beth admits. Supposedly Zoe spits men out, and she honestly doesn’t think Kevin stands a chance. And she loves Kevin, especially since he’s so good with her kids. Well, didn’t see that coming.

Toby and Kate get real about what the doctor said. Toby said he’s kind of happy IVF is off the table, since he got scared when the doctor talked about the possible aftermath. He offers to taper off his medication, which may be lowering his sperm count. But “screw IVF.” There are other ways to have kids. Right then and there, they get a call from the doctor who wants them to come back in. 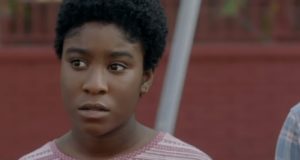 Deja walks back in the house, admitting she snuck out. Randall admitted that no matter what, there are rules — until he sees a big present she brought back for him. At the doctor’s office, Kate and Toby learn that the doctor talked to her colleagues, and said that while there’s a 90% chance of failure, she decided to look at the 10% side. Kate is in tears and gives the doctor a big hug. It IS what she wanted after all!

Deja gives Randall a pair of expensive sneakers but says she had a connection. Also, hey — if he wants to sign any kind of parental paperwork, he can.

Back to Toby and Kate. After Toby comes to terms with the fact that there’s a 90% chance of failure, he dumps his antidepressants right down the toilet. Then, flash to a scene where Toby is in bed, old and sad? Damn you, show! What is happening? They also show Rebecca kissing some dude with a bouquet of flowers who isn’t Jack. This’ll be a hell of a season of This Is Us, for sure.