Ever hear of a “rope ramble” before? I’m pretty sure that’s the official Survivor name to this particular obstacle-course challenge that Jeff Probst is having the three tribes participate in at the start of the show. But, it’s the last challenge that’s the hardest.

It’s because every tribe member needs to land a “bolo.” And yes, I’ll be Googling* that later before publishing to make sure I heard right. That means that it’ll be painfully obvious as to who the weakest tribe member is. And it’s likely David, over on Lesu. They’re fighting for PB&J, by the way. 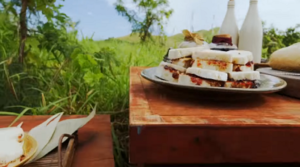 Kama wins. Big surprise, right? But, a second place winner will soon be announced. I bet money it’s not Lesu. And, I was right! Manu also wins some PB&J. “Kama. the five of you have lost one challenge this entire season,” Probst exclaims. When he sees Lesu, all he can say is “wow.” David thinks they’re cursed.

“It’s interesting, I didn’t even ask a question!” Probst says, noting that they’re all just watching this story unfold. I’m getting a real “disappointed parent” vibe from him.

Even though Kama is probably going to be on this island longer than Probst, Joe still feels like he wants to feel needed by his tribe, to get that “returning player” target off his back.

Roy thinks he’s in a pretty good place game-wise, but he still thinks he wants to get rid of Joe. However, he admits that Joe is pretty much the reason the camp is successful. Literally, nobody else knows how to do shit. “Joe can not go too far in this game,” Julie also admits. She thinks that if they don’t get rid of the returning players now, they can all bond together and take out others after the merge.

PB&J aside, Wendy’s tribe is still hungry. Which means they might have to hunt down those chickens. Sorry, Wendy. “We’re in the Survivor waiting room of the Manu tribe,” Aubry says. “It’s so frustrating.” She seems bored. Especially because she came in to play, and nothing is really happening.

Victoria thinks they need to get rid of Aubry when she least suspects it. She likes Aubry, but. The game needs to be played. Victoria talks to Aubry a little and talks about their “buffer vote,” which is Wendy, but thinks maybe they need to pull a big move together while Wendy is still around. Aubry is all like, finally! Big moves!

Over at Lesu, Wardog talks about how he can’t fish since he doesn’t know how and is too tired. David is at least aiming for some snails, and perhaps a hidden immunity idol. “I need it bad,” he says. He needs to step up and be a big person, and not just a lonely guy in a 2-bedroom apartment with a wall of DVDs. “I will never give up in this game,” he says. 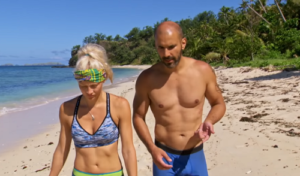 “Wardog is on my side, Kelley is on my side, and I have an idol,” Lauren says. Wardog talks strategy with Kelley, and it’s like… literally the most I’ve heard him talk all season. Even though Kelley likes Lauren, she thinks Wardog is a little more trustworthy. And an “evil mastermind,” as she says.

How are our friends on Extinction Island? Chris finds a box with goodies for all of them! Keith is especially excited. “If the stars align, they’ll point the way,” Chris says, reading a map that says they need to get “back in the fold.” It’s a puzzle map!

Rick, my ultimate fave who was voted out last week, figures it out since he’s clever and wonderful. It has to do with a tree. Keith goes ahead and tries to figure it out before everyone else, who all call him an “a-hole” because of it. Seriously, Keith couldn’t have waited. “This is for family, this is not for Chris!” Keith mutters. But, it’s Chris who finds the bamboo clue. Rick gets another advantage, which is an extra vote to someone at Tribal tonight. They won’t know who it’s from.

Now, it’s time for the Immunity Challenge! It has to deal with a pontoon, and a puzzle, and the building of a pyramid. The two tribes who win (so, Kama and Manu) will get immunity, and Lesu will go to Tribal.

And, it’s sadder than ever. Lesu has zero puzzle pieces while the two other tribes are in the midst of solving. Why are things so sad for Lesu? “Wentworth in despair, once again!” Probst calls out, as Kelley puts her head down while floating in the water.

“Lesu is not a tribe that quits, they’re just a tribe that has trouble winning!” Probst mutters as David flails in the water. Finally, Lauren ends up getting the puzzle pieces. I honestly don’t know why this was so difficult for everyone? Whatever, they’re back in the game.

Kama wins first, and now it’s between Manu and Lesu. Shockingly, Lesu pulls it off. Good for them! “We don’t have to go to tribal tonight!” Lauren yells.

At Manu, Aubry and Victoria talk to Wendy about getting rid of one of the boys. But Wendy isn’t giving her opinion, probably because Wendy is kind of dumb in this game and was likely in it for the vacation.

While rummaging around for space in her bag. Aubry finds a clue. It’s Rick’s extra vote! “Someone in the game is looking out for me,” Aubry says.

This episode of Survivor is two long hours, so here’s the first of the tribal councils. In the game, fire represents life, and blah blah blah blah.

Gavin says that he’s curious to see what tonight holds. Aubry says you always need to be “a talk ahead,” otherwise you’re out before you realize. Probst mentions that Wendy is an obvious consideration, especially because she’s an outsider. Wendy says nobody understands her gameplay, and even if she has to leave, she’s just happy since she’s here. Okay.

Anyway, it’s time to vote. Wendy is first, and who knows who she’ll vote for. Probably someone on another tribe. Probst goes to tally the votes, and nobody plays their immunity. Which is a mistake, since Aubry was voted out. “You guys are unbelievable players,” she says. Followed by “Wow,” “Wow,” and “Damn!” Of course, she decides to rejoin the game at the Edge of Extinction. And, nobody else seems to be there? Wait, no. They’re there. She uses the waiting room analogy again.

Hour 2 (I Mean, The Reward Challenge)

Wentworth, Joe, and David seem a little surprised over the fact that Aubry is out. After all, she is the first of the returning players. The challenge this time around is about dropping flags. The reward this time around is coffee, tea, pastries, and cookies. Much like the PB&J, the second tribe to finish gets a smaller plate. 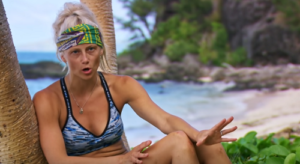 Lesu loses, no surprise. Kelley says that she’s jealous of Kama since Joe is literally carrying the tribe. “I want that. And I don’t have that!” she says to the camera.

Julie from Kama is like, “I expect to win challenges now!” They all know it was Joe who won it for them, and even though everyone knows that, he’s still a target. Aubry leaving hurt Joe’s game, since he knows he’s at a disadvantage here. “You’ve got no one to rely on,” he says sadly. Then, Joe wipes away tears. He knows people at home have his back. Joe decides to try and align with Julia since she’s also a threat in his eyes.

Wardog and Lauren lament about having no food for days. David is still trying to fish, but he’s just super bad at it.

The Survivor castaways hanging out at the Edge of Extinction get more maps. Aubry pretty much follows everyone else, since she has no clue how to interpret the maps as a newbie. Chris says the second map is way harder than the first, but eventually, they figure it out.

In the meantime, Keith finds a weird knot advantage in the sea. Chris and Rick laugh at Reem for giving away the advantage to Keith — even though she saw it first, it was Keith who touched it first. Aubry considers this whole mix to be like a huge dysfunctional family. “People are legitimately losing it,” Aubry states.

Once again, Immunity is back up for grabs. This challenge deals with a ladder and a cage door, and — you guessed it — a puzzle. But here’s the big kicker. Only one team will win immunity. Two people are getting kicked out, which means three people tonight! 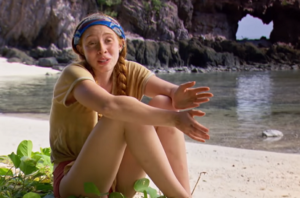 The Tribals will be together, which is interesting. And it may end in drawing rocks. Earlier, David said it’s fun as a fan, but not as an actual player. Victoria thinks that the fact that they have two returning players is a good thing for their tribe.

Gavin doesn’t want to go out with rocks but also knows that’s the game he’s playing. When you enter Survivor, you sign yourself up for stupid stuff like this. Manu is cool with rocks in general. Over at Lesu, Wardog is thinking about Wendy. Lauren thinks she’s the target here, and they all agree to go in “four strong.”

The second Wardog walks away, Kelley and David admit he’s totally plotting. And he is! He’s against Lauren. The three remaining admit he does absolutely nothing around camp. While he runs off to look for an idol, his tribe eventually finds him — and Kelley manages to score that idol instead.

Has Survivor done this before? If not, hey. It’s kind of cool. It’s hard to vote for someone you don’t know all that well.

Probst notes that Wendy is the only one here with some insight. She says she feels like she’s “in the middle.” David says that they still consider Wendy to be part of their tribe, which… eh. David talks about how he “goes to rocks” for his people, and has no issue putting his fate into rocks.

Victoria totally doubts this. Suddenly, David wants to quietly whisper to Wendy while at council. And with that? They’re ready to vote.

Probst tallies the votes. Nobody gives up an idol.

The votes are between Wendy and Lauren. Someone actually spells “Lauren” as “Lorine,” which — really? Wendy and Lauren tie, so they revote. Whispers happen! It’s rough. Rocks are mentioned. But upon a revote, it’s Wendy who leaves. And she almost seems happy about it? She hugs Probst, who just says “wow.”

But then she gets lost. Eventually, she finds the famous Extinction arrows and decides to replay the game. Let’s hope the Edge of Extinction on Survivor doesn’t ever include chickens.

*Yeah, even with a search, I still can’t figure it out.