Welcome back to Survivor! And judging from the previews, this is a Survivor episode you won’t want to miss. Like, uh. Last week. (Sorry for not recapping last week.)

While discussing strategy, Kelley Wentworth is still all about getting Wendy out. She’s kind of an untrustworthy live wire. But, that plan may not work out, as the tribes are swapping again. Probst is going from two teams to three. Weirdly enough, everyone pretty much ends up with their original tribe aside from Wendy. 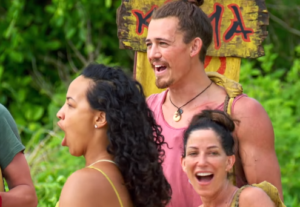 “Ever recall a switch like this?” Jeff Probst asks Survivor superfan Gavin. Now the teams are called Kama, Manu, and Lesu. “Sounds about right,” Lesu member David says. Rick doesn’t think Wendy’s going to make it, since not only is she the odd lady out, but she’s going back to her beloved chickens. We all know that she can’t help but get sad if they get slaughtered.

Joe wants to get Ron on his side, especially since he doesn’t think that Ron would vote him out. “I love him, I adore him,” Ron later tells the camera. But when this was happening, Ron had someone look through his bag to see if he had an idol. Sneaky!

Nothing was found in his bag or his pants. So that means he’s an easy target. Oh, Joe.

Lesu thinks they can maybe at least get second place at challenges this time around. But it’s especially tough since Wendy used to be their easy out and now there’s no go-to person to vote for.

“I really underestimated how difficult it is to not eat and not sleep,” Lauren, who may fill Wendy’s shoes based on this edit, says. She really misses her parents, and it’s “really hard not to have that support system.” She sits sadly by a tree. It’s been nine days, by the way.

Wendy leads her new tribe around camp, even though she’s totally the target. Even so, Aubry likes her. Wendy openly says that even if she’s on the bottom of this new tribe, she’s glad she swapped because her old tribe was boring. Then, she spills all the Manu secrets.

Then, the new tribe talks about eating chickens and Wendy panics. And… holy shit. She steals them during the night. “I know it was on their agenda to kill these chickens,” Crazypants says. “This is my master plan.” To lose the game, Wendy?

Like, seriously. Did she not know that there might be chickens? This show has been on a billion years. 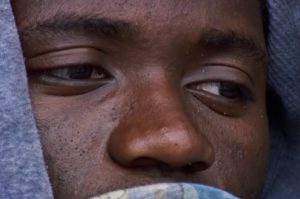 Back at the Edge of Extinction, the castaways are sitting hungry in the rain. Chris is very angry, as he’s stuck on an island with two people pissed at him. “I’ve got a fear of failure and a need for approval,” he admits. He wins some love based on fishing for the group. “Chris, you’re amazing,” Keith says. I think he may have legit died if Chris wasn’t voted out.

So, that’s sad. But over at Manu, things don’t necessarily go to plan. Eric admits that he kind of knows it was Wendy who freed the chickens, and that if he happens to catch one, it’s immediately dead. She said that catching a chicken would be worse than going to tribal council. Suddenly, her tribe starts seeing how unhinged she really is.

But now, it’s time for the Immunity Challenge. And two tribes are winning it this time. This challenge deals with ropes, heavy crates, and a puzzle. And it’s raining, so. Hooray.

Kama gets it first, and let’s seriously hope Lesu gets second place. I honestly can’t see anyone but Wendy leaving tonight. But, alas. Manu wins, meaning this is David’s 9000th time at Tribal. The only lead we have here is that Lauren is out for being too sad.

Lesu is all bummed out about how much it sucks to always be last, especially without Wendy. As expected, Lauren is the name getting thrown around, mostly because she’s not eating due to nausea. But when she catches wind of this, she tells the camera that she’s a soccer player and way stronger than people think.

Rick gives a funny “Lesu Evening News” report since he’s a news reporter. It makes people laugh, even though someone knows they’re going home. He says they all have affection and respect for each other. Lauren thinks the new camp is a mess, with limited supplies and limited food. It’s also exhausting to build a new shelter with only five people.

Wentworth is near tears because she’s so close to her tribe and has experienced so much with them already. The Wardog says some stuff, and I haven’t paid attention since I fail to recognize the fact that there’s actually a Survivor cast member out there named Wardog.

Everyone is sad and mopey and admits there’ll be no hard feelings. I’m hoping this ends in a group hug. Rick’s vote is revealed to be towards Lauren, and Lauren’s is towards “Kick.” Wait, no. Rick. Her letter lost a loop, probably due to not eating.

It’s tied between Lauren and Rick until the final vote is read — Rick. Seriously? David is totally blindsided by this since they were tight. “It’s all good bro,” Rick says. He makes a joke at the end and everyone’s all sad.

But now, he sees the signs. Obviously, he decides to go back in the game without hesitation.