Hey, it’s Survivor Wednesday! Let’s check in with Reem, shall we? She’s stuck on a deserted island, trying hard to figure out two things. One, what the hell is this game all about. Two, why was she voted out? She didn’t realize she was coming off as a nag. In her head, all she wanted to do was help.

Wendy is a little bitter that Reem was voted out, especially since the whole thing seemed somewhat orchestrated by Kelley. Kelley had the time to play, and per Wendy, if she could have won, it would have happened already. She admits that David’s game so far is “go with the flow.” This is only episode two, by the way. I don’t think everyone knows what their game is yet. 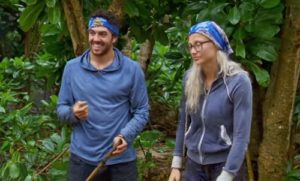 Kelley understands Wendy’s position — she’s been on the bottom before, and will probably try hard to either find an idol or find a new gameplan. To prevent the former from happening, Kelley suggests her “alliance” have an open idol search.

Aurora from Kama think they won based solely on morale. It seems the whole tribe is into dancing and having a ton of fun. Aubry hates “Kumbaya Survivor” but is faking it for the sake of the tribe.

Aubry also knows that she’s going to be a target along with Joe, but maybe they’re not just talking to her about their feelings. Turns out, Aubry has been pulling the new people aside and saying she likes them a lot. She’s even using the same phrases. “You just remind me of me a lot” is a big one. Victoria thinks she’s done a great job already at trying to secure her place, so she might need to go.

Kelley was right about Wendy making moves. She’s trying hard to orchestrate a blindside, and she actually wants David on her side. And Rick, and David and Rick are like a packaged deal. David says it’s good that Wendy is so loyal. “Rick’s hysterical, I love the guy,” David says. “I’m going to try to keep Rick around for as long as possible.” Personally, I don’t think Rick is all that funny. But, whatever. He makes David happy.

Julie from Kama, an Etsy store owner, notices the guys are looking everywhere for idols. She talks to Victoria about it, who mentions how she doesn’t even know where to start looking. Julie says they’re just there chitchatting when they should be checking trees.

Lauren goes out to look, because she looks up to past players like Parvati and Kelley Wentworth. “This is Survivor, you could find an idol anywhere,” she says. She finds a fallen tree and is drawn to it, for good reason. She gets it! Survivor bucket list item crossed off. But then.. she hides it in the sand? I know she’s wearing a tiny bikini with no space to hide anything, but I just have a feeling one of the other Survivor tribemates will very easily find it. Or, it’ll get washed away in the ocean.

It’s finally time for immunity. Each tribe needs to go up a cage, and.. do things with rings. They’re also playing for a reward. They can choose between spices plus knives and a cutting board, or a fishing kit. Two good choices. But, fishing is probably best. Aubry has done this challenge before, and says it’s a “heavy snake” and that she lost out last time around. 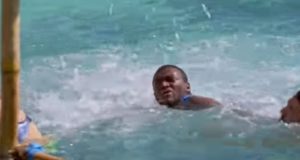 Remember how Keith had trouble swimming? Well, since Reem is gone, he didn’t get any better. He’s going very, very slowly.

Aubry was right — that snake (which isn’t a real reptile, like I initially thought) looks very heavy. The snake contains six discs that they’ll use for their next puzzle. Then, the ring toss. Kama is up by two, and it turns out that Keith isn’t just bad at swimming — he’s also bad at tossing rings. Kama wins, and as predicted, they do a little victory hop dance.

Keith knows his game was a disaster. Between the swimming and the rings, he thinks his name could be on the chopping block. Wardog thinks that Keith is actually “a liability.” But Kelley thinks it’s really stupid, especially since he’s not a threat to anyone. Wendy, on the other hand, is a threat to Kelley.

David thinks he doesn’t have the five votes he needs to get Kelley out. Chris thinks Keith totally shot himself in the foot, which sucks since he’s a “good kid.” Keith promises he’ll never turn his back on Chris, especially since Chris pretty much dragged his ass in that challenge.

Chris comes up to Rick with the same idea to blindside Kelley, which is a huge deal. This news excites David, who exclaims, “yes, yes YES YES!” He views all of this as being just like Christmas. “This tribe isn’t big enough for two returning players,” he states.

Wardog isn’t happy. He is still against Keith, and wants the guys to all go with his plan. Kelley, on the other hand, sees that people are acting strange and feels like she may be blindsided. She trusts Lauren, but nobody else. Probably because Lauren is a Kelley Wentworth superfan. Dear god Lauren, don’t give her your idol.

Time for Tribal Council. Lauren says they can’t lose again, and thinks if they have a strong tribe, things will be better. Jeff Probst asks if that worries Keith, since his performance at the challenge was, in Probst’s kind words, “a disaster.”

Probst goes to tally the votes. It’s either Kelley or Keith, you guys. Nobody plays an idol, so Probst reads the votes. Kelley and Keith both start with one. Then, Wendy gets a vote. Then Keith gets another. And, uh. Bye, Keith. Sorry. You were a nice guy.

The best part about this new twist is that for the first time, we get to hear what Survivor contestants say after being voted out. For Keith, it’s “dang dang dangit!” But oddly enough, he seriously has doubts as to whether or not he wants to rejoin the game, and actually asks God. And, that’s the cliffhanger. So, who knows. But like, really Keith? You’re going to quit now?

They don’t even talk to Keith at the very end. They just cut to Reem, saying she’s lonely and has only eaten a few bites of coconut. Getting these two back together would just warm my cold heart.