Hey, Teen Mom 2 time! Leah’s gals are playing outside, which is a weird relief. She’s been busy with the girls at school, and they all have dentist appointments. Jason might go to the appointment with him, which sounds like a lot of fun. Have you ever gone to the dentist with a kid before? Multiply that with three, one who’s getting a tooth pulled. 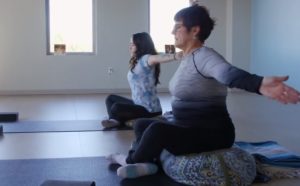 Jenelle, who’s been frustrated with filming, takes a yoga class with Barbara. Babs last did yoga 45 years ago, while Jenelle is hoping to find “peacefulness” from the class. By the way, it’s a class with just them. It’s kind of adorable. Who thought like, three years ago that they’d be doing Mommy and Me Yoga?

Barbara asks about Kaiser, and supposedly he’s busy practicing his colors. Which is weird, since he’s four, going on five. “It’s such a waste of time, all this court stuff is just a waste of time,” Barbara says. Really, though? Like, you took Jenelle to court over Jace, Babs.

At the DeBoer house, Chelsea just got news that Adam officially gave away his rights to his other daughter Paislee. “That’s rock bottom,” Cole said. “The judge said, do you realize this is forever to him, and he said yeah,” Chelsea says. Paislee was adopted by her mom’s now-husband, and that’s that. So, what’s going to happen to Aubree?

Cole said he’d adopt Aubree in a heartbeat if she wanted that. But, he won’t push her either way. “I think she’s old enough now where you can’t just make that decision for her,” Chelsea admits.

Briana is finally bringing Stella home, and she’s glad to finally be out of the hospital. Her mom says that Devoin really stepped up with Nova, and it took six years, but they’re finally at a good level. So, maybe Bri won’t feel lonely with parenting forever.

Speaking of lonely parenting, Jo is looking to get $1,000 a month from Kail for child support. And it’s especially weird since they have 50/50 and Kail really wish he talked about it with her first.

Leah’s about to pick up the girls and bring them to the dentist. Jason agrees to go, which is probably bound to make a hectic situation even more hectic, but whatever. When discussing her tooth getting pulled, Ali very dramatically says “It’s going to hurt, mother.” Hehe.

Ali got a popsicle for a job well done. Post-appointment, the twins go with Corey. Leah felt bad since the situation was awkward, but Jason says it’s all normal. She has kids with Corey, but this is all part of moving on.

Over at Jo’s place, Jo tells Vee that Kail has a ton of money, and is still asking him for money. Jo isn’t broke, but his life is a lot more normal. He doesn’t have book deals. YET. “I’m entitled to the help,” Jo admits. Oh, also he states that she makes five to 10 grand on Instagram ads per month, which I’m sure everyone wanted to know. Those ads are crap, but I’d do them for an easy five grand, for sure.

Nathan and Jenelle are supposed to meet in court, but Doris, Nathan’s mom, says that it was rescheduled to January 14th. Doris will make sure that Kaiser is taken care of, and Nathan is like “Yo mom, I’m his father.” He says that while he gets along well with Jenelle and David, they don’t get along with him. Then, he hangs up on her.

Nathan tells a producer that his mom has always belittled him, and made him feel like he’s not doing anything regarding things that matter to him. Drama! 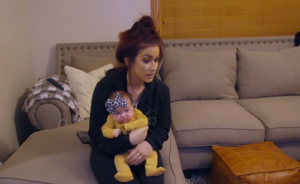 Chelsea brings baby Layne over to visit her mom and to talk about this whole Adam/Aubree situation. Chelsea learned Adam is back on drugs and doesn’t want him to continue hurting Aubree. “God forbid something happens to you,” his mom says. “If something happens to you, she’s gone.” Chelsea says they were going to set up a will, and her mom tells her that a will won’t matter. If she’s Adam’s daughter legally, she’ll go with Adam.

Briana is getting back into a routine with work and daycare, especially since Brittany is back in town. After complaining that Louis isn’t helping with bills, Brittany sasses her and says that she’ll end up having yet another baby with a random again. Harsh. Briana makes sure she knows she’s on birth control. Also, both of her daughters are in the room as this conversation is happening.

Kail is prepping for the worst for this whole child support thing. She’s at a level where she’s hating Jo but can’t tell Isaac that. Guess he has to find out himself when he watches this episode in like, a year.

Corey chats with the twins and then tells her dad how he met Leah’s new man. He said it wasn’t too awkward. “He hunts, I hunt, we talked about that,” he says. Jason also thinks Corey rocks. “I’m here to support your family, but he’s the dad,” Jason tells Leah. He respects the fact that Corey takes care of his kids and does what he’s supposed to do. Sounds like Jason likes him more than Leah does.

Kailyn calls her friend back to talk about what her attorney said regarding child support, and thinks the max Jo could get is $2,300 per month. But, they need to prove expenses for Isaac first. Jo is also looking for back pay, up from January. They need to go to mediation next month, and the court date would be 4-6 weeks after that. “That’s more lawyer fees for me,” Kail says. She thinks this is just a payday for Jo, especially asking for so many months just now.

Nova and Brittany are hanging out while Stella is angrily rejecting most foods. Toddlers, man. She tries to join in on the fun, but Brittany tells her she’s “not invited” since she never ate her food.

On the subject of child support, Briana tells Brittany she’s about ready to file against Louis. Brittany calls him Mr. Potato head and is hoping Briana gets more than $20 out of him.

Chelsea made the wise choice of talking to Aubree about Paislee. In front of the camera, Aubree isn’t ready to talk about. They all meet up at Houska Manor, where Randy gives Layne a cuddle. The two look a lot alike.

Chelsea confides in Randy and says that Aubree doesn’t feel comfortable making the choice if it means Adam won’t be her dad anymore. Randy thinks that as she gets older, her decision may be a bit more defined. She might realize later on that Adam just isn’t coming back. As someone who’s felt for Aubree since the day she was born over this dude, I really hope the decision becomes easy.