Welcome back to Teen Mom 2! Chelsea’s section is up first. She’s seven months pregnant and just bought a house with Cole. The home comes with its own cheesy wall decor, which Chelsea is super not fond of. They also need to do a little bit of painting before really feeling at home.

The house is also not close to other homes. It really is in the middle of nowhere, which was the selling point for Chelsea. 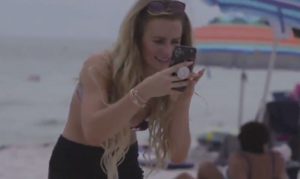 Leah’s summer is spent at the beach. A few months ago,  she introduced a new guy in her life. Good for Leah, hopefully. So far, he’s not giving off too much of a creepy Matt Baier vibe. His name is Jason, and they met through mutual friends. He’s also 39, which is old, but not super old when you were a teen mom with three kids. He’s also been married twice, like Leah.

Speaking of, Leah let the dads know that she was seeing someone, and she mentioned that they all trust her opinion on introducing him to the kids.

Jenelle’s segment opens up with a bit about Kaiser and custody. These days, Jenelle has him — but, mediation is involved. Jenelle and Barb are actually getting along these days. Jenelle credits it to Babs being nice to David, but Babs thinks their closeness happened after this whole Kaiser debacle took place.

So, Jenelle also refers to David as “my husband” all the time. He technically is, but it still seems a little forced. She cries on camera and says that David isn’t a bad guy, he actually does everything he can for their family. Bullshit, Jenelle.

Kail mentions how Javi’s new girlfriend is pregnant, and how raising three boys is tough. Chris is doing pretty good and actually makes his child support payments. “I’m just really proud of him,” she says. The two of them are “working on it,” meaning neither one of them is seeing anyone else. 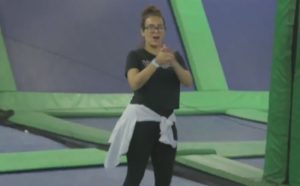 Javi told Kail about the pregnancy firsthand, which is at least good. Kail wished him good luck and asked Lincoln if he’s excited, and supposedly he is. She’s not very fond of Lauren the girlfriend, especially since she was involved with Javi when both Kail and Briana were. Also, Lauren called Kail bad words. Have any of these girls learned not to diss Kail?

Speaking of Briana, she’s upset the Devoin hasn’t been spending enough time with Nova. And since Nova is into things like trampoline parks, why not? “I’ve come to the conclusion that I’m kicking Devoin out,” she tells her sister. Supposedly Devoin stood them up for a pool date. Supposedly he’s only a good dad when he doesn’t have a phone on him. This isn’t good for Nova at all, of course.

Barbara talks a bit more about what brought her and Jenelle closer. “I guess she needed her mother at that point,” she admits. Prior to, they went about two years before getting along. Remember, Babs didn’t even get an invite to her wedding.

Enter Nathan. He’s talking to a similarly built guy and tells him that when Kaiser needed help with wiping (a story he’s surely going to be glad his father announced on television in a few years) he noticed some marks on his butt, which Kaiser told him came from Nathan. He’s at a point where he doesn’t want David anywhere around Kaiser and thinks it’s ridiculous that David’s visits aren’t supervised.

Jason stops by Leah’s house, and Leah admits that he’s still getting used to the cameras. The girls give him some tips — like, don’t fart on camera and don’t use the bathroom while on camera. All good tips.

Leah says the girls were really excited about Jason, but on camera, the girls are like “eh.”

Briana threatening to kick out Devoin happened like, a day too late — he already found his own place. Chatting with a friend, Devoin says he’s been working 40 to 45 hours a week and says that living with Briana was a little weird because they weren’t actually together. Still, it was good for him to see Nova every day. Even though due to his work, he didn’t get to see her as much as he wanted. 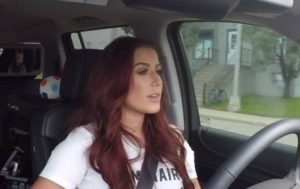 Speaking of visitation, Adam will be visiting Aubree. Chelsea goes over the hows and why’s of the visitation. Aubree has a few questions to ask ahead of time — she doesn’t know what to talk about with him, and also wonders what to say if Adam asks about Chelsea at all.

But, that’s okay, since Adam doesn’t show anyway. “So the whole visitation’s canceled?” she asks. “We just drove over here for nothing I guess.” Chelsea is speechless. Instead, the two go out to get ice cream. “Either way, it’s just disappointing I guess,” Chelsea states. Is anyone actually surprised? Adam is a piece of crap, and he has been since Chelsea first appeared on MTV.

Back at Kail’s house, the kids are hanging at the pool when a frog gets stuck in the pool basket. Kail tries to pawn basket removal to her sons, but they’re not into it.

Now, a scene of Lauren and Javi. BORING. Lauren says she hasn’t met Kail yet, but thinks Lincoln is an easy kid. Javi says that every time he’s in a relationship, it hasn’t been easy for her. But this time it should be different since he has a house and soon a baby with Lauren. But again, keep in mind that he was snooping on Briana and Kail while this baby was conceived. Javi is also a piece of crap, but he’s still not as bad as Adam by far.

In order to avoid cameras at mediation, Jenelle brings David. As you know, MTV isn’t filming him. Nathan’s mom says that the bruises on Kaiser weren’t actually bruises but switch marks, and that it’s obvious something more sinister took place.

Mediation didn’t work, and Nathan chose to see Jenelle in court. He’s hoping for a better outcome. Jenelle celebrates (I guess?) the mediation by getting ice cream with Barb and Jace. Jenelle says that Nathan got riled up about how David is dangerous (he is!) even though supposedly he’s not (he is!)

Briana tells Nova about Devoin’s new place and tells her that if she ever wants to visit him, she can. Also, Stella gets some screen time. She’s still super adorable.

Now, it’s time for soccer practice — it’s the first time Kail is really seeing a very pregnant Lauren, and while they don’t interact, they still find a way to make it awkward. “So that was that,” Kail says, packing up the car.

Now, time for ice cream. Chelsea asks Aubree how she feels, and Aubree was shocked. But when she saw Chelsea got the call, she knew. “I know Cole would have shown up if we had to do that,” Aubree states. Chelsea says it’s not fair to give someone’s hopes up like that. Aubree isn’t hurt,  but she’s disappointed. But, the ice cream is helping matters.