Uh, so. True story. I totally forgot about the Teen Mom 2 reunion, so I’m coming in a little late.  I think I’m just so burned out on all this Kail and Briana stuff (well — Briana stuff) that my brain tried to do me a favor. So I’m tuning in about 15 minutes late, and — great! Briana’s on screen. Looks like I mostly missed a lot of flashbacks and “on this season” nonsense. This part of the reunion will be all about Kail and Briana, much like the entire season.

Dr. Drew asks Briana what’s happening with Javi, and Briana admits they don’t talk. Devoin is working, but he’s not being a father — which is a real bummer, since things looked really promising with him at the end. Turns out, Briana offered him free rent at her terrible crowded home for the help for Nova, but instead, he just played video games and slept in. Stella’s dad moved to New York, and does absolutely nothing. Except, paying for her daycare. Daycare is expensive, so that’s something (but not enough, at all.) Briana breaks into tears since she has negative relationships with a lot of men, and felt the same pain her daughters feel with her own dad. Dr. Drew states that her pain probably turns into anger. “I don’t know why they don’t want to be there,” she says.

Dr. Drew says that he knows Briana and her family dedicate their lives to their kids, and Briana seems thankful. “I try,” she says after audience applause. Now, onto the kids — Nova is reading, and Stella is starting to walk and says “Mama.” She crushes rumors of a new guy, and Dr. Drew says maybe her next relationship should be with her therapist. That’s probably true, but a little harsh to hear in front of an audience. Next up is Devoin!

Devoin, who talks about celebrations with McDonald’s and Crown Apple, wants nothing but respect with Briana at this point, but he wouldn’t consider getting back together with her. He does have a few girlfriends, though. Nova misses him, and he misses Nova, and honestly? Devoin might not be a great father, but he’s at a way better place than he used to be. He seems like a solid dude on screen, especially in comparison to some of these other Teen Mom dads. Still, he’s no Gary.

Kailyn is up next. Dr. Drew wants to know what happened in the room — Kail pretty much said she was ready to fight, without cameras. Kail brings her phone out to recite the bad shit Briana said. Briana sounded off on Instagram about Chris beating her up. “The fact you brought my kids into it, I felt some type of way,” she said. Drew admits Kail took it to “a violent place.” Still, no hands were thrown. I like Kail, but I’m tired of all of this.

We Need To Talk About Javi

After watching the clip show, Kail says Javi and Bri are very fake. She states Javi is a manipulator, and he’s so charming that you forget you hate him when you’re in his presence. “This is who Javi is,” she says. She thinks both of them wanted the relationship for publicity and airtime. Kail said she’d be fine with it if they came to her first about it, and Dr. Drew is like “LOL no.” She amends that statement, saying she would have been “better” with it. 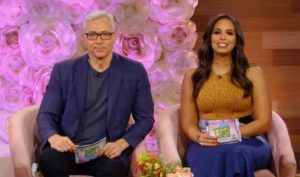 Next up, Dr. Drew talks custody. She has 50/50 with Jo, which she’s not happy about but it’s fine. Sometimes, Jo doesn’t take Isaac to sports. Her relationship with Chris is up and down. But he never really seemed proactive of custody, so when he finally asked, Kail just laughed. She does have a great relationship with Chris’s mom, which is good. These days, Kail doesn’t know if she’s open to marriage again. She’s afraid to love someone else the way she loved Chris. And she admits she’s still in love with him. “I know it would never work,” she admits. Dr. Drew doubts it’s love. How does he know?

As for Lux, he’s close to walking and is on the move. Isaac and Lincoln are so good, and eat a lot. Nessa, Dr. Drew’s co-host for some reason, asks the big Dom question. And no, she doesn’t have a relationship with Dom. They were thinking about it, but no sex was involved, and they were pretty much just friends. Dr. Drew wants to get back to the fight. Kail said it was her job to come back to the stage for the audience.

Now, onto Jenelle. Kail calls her a “nonfactor” and says she doesn’t think of her much. She’s totally cool with Chelsea and Leah, though.

That’s a perfect segue into the next guess — BARB.

Barb explains that Jenelle isn’t at the reunion since David couldn’t come. She’s trying really hard to be friendly to her, but never gets text responses back. As for Jace, he’s about to enter fourth grade and he’s doing really well. He has ADHD and often has anger outbursts, which has been difficult, but he’s gotten better on medication. When he sees Jenelle, Jenelle doesn’t give him the meds at all. Barb thinks it’s a defiant thing. “I don’t feel Jenelle’s okay,” Barb says. “There’s only so much you can do,” Dr. Drew says.

Barb mentioned the road rage incident, and Jenelle stated that Jace made up the fact that she pulled the gun. Barb said that when she learned the truth, she almost threw up in her kitchen. “This guy is just so…I can’t even describe him,” she says. She’s bonded with Nathan’s mother about how scary David is. “It’s funny but it’s not at all,” Drew says. Barb thinks David can come over and kill her at any point, and noted that he teaches kids to shoot guns at the ages of 2 or 3. YIKES.

And Dr. Drew cuts it off there. I kind of wish we got more than 4 minutes of Barb. On part two of the Teen Mom 2 reunion, we’ll see the other girls — including Dr. Drew’s remote interview with Jenelle.