Ready for the second part of the Teen Mom 2 reunion? No? Well, too bad. Because it’s on now, and Leah is on first.

Leah’s biggest plotline this season was dealing with Ali’s illness. Dr. Drew said he had tears in his eyes while watching, proving to me that he may have actually tuned into this season for once. Corey comes in through video chat to talk about it more, and it looks like he’s in front of a green screen or something. He’s about to celebrate five years with Miranda. As for Jeremy, he’s MIA.

Kail joins her next. She says that she and Leah have always been close, and they’ve hung out a lot, but MTV never really filmed it for Teen Mom 2. A shame, really. She’s asked what she thinks of Jeremy, and Kail thinks the two of them are a lot like her and Javi. Probably because they all still hook up. Kail thinks that she and Leah have had similar dating patterns, which helps them get along.

Now, time to hear about Leah’s new guy! He’s older and owns a bunch of businesses. He’s in his late 30’s, so he’s older. She’s just 26. “This is good though! This is good news,” Nessa says. Kail saw a photo of him and is supportive.

Next up is Javi. He said that right now, he’s not sure why there’s still beef between Briana and Kail. “I’m trying to believe you,” Nessa states. Javi admits knew it might have caused some drama. “Did you actually propose to her?” Nessa asked. Javi said he forgot. He said he thinks he just gave her the ring, but then he took it back. Javi admits she wore it out to dinner and wore it to see friends.

Dr. Drew said that the women Javi has dated have called him a “shady motherfucker” and OH MY GOD, Dr. Drew is bringing it this year.

He thinks that Javi is addicted to love, especially since he has a girlfriend now. Nessa pretty much states he might be a sex addict. “I’m being as transparent as possible,” an attacked Javi admits. 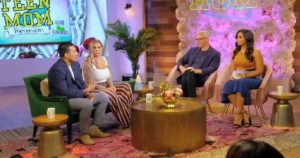 Kail joins Javi on stage.  Because I guess Kail is just joining everyone on stage? Kail tells Javi that he’ a manipulator, but he might not openly know that. Kail says she’ll always call red flags. Javi admits Kail isn’t always right, but Dr. Drew corrects him. Kail IS always right. Then, he asks them if they hooked up and Dr. Drew is like, “don’t stonewall us!” when they both shrug it off. Then they ask who initiated it. They’re both pretty silent. Javi said it might have been right after Kail’s podcast when he talked about the breakup. But, the hookup didn’t fuel the fight. In fact, Kail doesn’t even know if Briana knew about it.  Kail had no clue a proposal even happened until after they broke up.

Now, Nathan’s up. With Babs! He said that Kaiser had told him several times about abuse, and mentioned he takes pictures of every sign he sees. Babs says David yells at his mother and makes his mother cries. Babs says he has a father but doesn’t know where he is. Supposedly they welded together. Per Babs, he does nothing for a living these days.

“I was totally a different person with Jenelle,” Nathan said. He said his worst moments were with her. There’s pestering, name-calling, and harassment, and the cameras just show the worst. He says Barbara is pleasant to be around. A reality show with the two of them, plz.

Now Jenelle’s taped scene! Dr. Drew admits this season was the most intense with Jenelle. Probably because Dr. Drew didn’t watch the heroin years. Jenelle talks quickly about how Jace said she and David were “pieces of shit” and she blames her mom totally for that. That’s supposedly Babs language. Jenelle admits she doesn’t give Jace his medication on Saturday mornings. He throws up since it’s a stimulant. But he gives it to him Sunday before returning him to Barbara.

Jenelle admitted that if the kids ended up being gay, he’d love them, but not support their lifestyle. Dr. Drew says he wishes David would change what’s in his heart. Jenelle said it was all about how he was raised. Now, the road rage incident.

Jenelle said she’s had PTSD since the incident, and didn’t leave the house. She didn’t think about traumatizing Jace at the time. Instead, she was thinking about this guy hurting Jace. Okay.

Dr. Drew said he was worried about Jace getting ahold of the gun and Jenelle said it’d never be an issue since she always has the gun on her. Okay. She admits he has it since he’s afraid when David isn’t around. Dr. Drew gives a gun stat to the camera regarding kids, which, good. Jenelle has always been problematic, but back in the early days of Teen Mom 2, it at least appeared as if she enjoyed life.

It’s 9:55! Chelsea is on video. She said it was bad to be on stage when people are fighting. Dr. Drew introduces her video clip on the grossest set ever. Without Nessa there, he’s not quite as fun.

Chelsea says that Adam doesn’t see Aubree at all. He can only see her at the visitation center and do lunches, but he’s only done one. Supposedly he’s in his house weeks at a time doing nothing. She admits his mom is a little in denial about his drug use. His mom had told her to “grow up” in court. “It was just weird to me,” she admitted.

Aubree pops up and says she’s excited for the new baby. Also, their pig is still in the picture. “Hope this pregnancy goes well,” Dr. Drew says. And, that’s the end of the reunion. PSA about birth control. Which is kind of laughable at this point, right?