Hey, welcome back to Teen Mom 2! Let’s get into it, shall we?

Chelsea’s hanging with the kiddos and asks Aubree about starting junior high. Really? Is she that old, or is that some sort of joke. She gives her some solid advice, like, make sure to talk to people. She has to wake up at 6:30, which, whaaat. I have some tough news for you, kiddo. That’s going to be the new norm for like, the rest of your life.

Speaking of school, Leah is going to talk to someone about Ali’s needs. It seems like her new boyfriend is the “other” in all of her scenes. Leah talks directly to him about muscular dystrophy, and how Ali’s case is extremely rare.

Barbara is now being filmed as Jenelle is refusing. Her big 911 call was released, which accused David of assaulting her. For the record, I 100% believe this happened and feel sorry for the girl. Babs says that anyone who deals with domestic violence needs to make the decision to leave by themselves. She’s experienced a similar relationship before, where she felt embarrassed. But it’s even worse for Jenelle since she’s dealing with this as a public figure. She just doesn’t want Jenelle to feel alienated, especially since things are going really well right now. 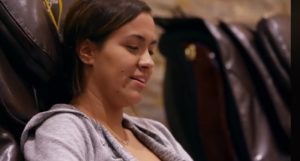 Now, Briana is having some kind of manicure gal pal date to talk about boyyyys. His name is John, and they call him the “chicken guy” since they met at a chicken restaurant. Then he stalked her. He hasn’t met the girls yet, thank god.

Kailyn’s friend Mark stops by to chat. Kailyn tells him about her New York trip to record her podcast with Catelynn and Tyler, and how it inspired her to reach out to her mom. Two people even did research and found out she lives in Maryland, which is just two hours away from Kail in Delaware.

Her new goal is to channel her energy into her half-sister who she hasn’t seen in a long time. The two have the same dad, and the last time Kail saw him was nine years ago. And it was weird. That was the one time they actually met. 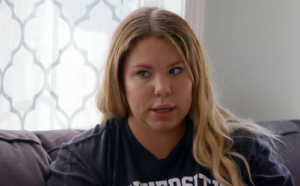 She texted her sister to try and get dinner, and Kail is all about building the relationship back up. Because, family.

Aubree takes a photo for her first day, even though she admits that her face hurts from smiling. They call Cole from the car so that he can wish her well. “I hope you have a good day, Aubree,” he says. Meanwhile, Aubree is like, halfway out the car.

Leah talks to her boyfriend about Ali’s needs while on the phone, and okay. I love these girls, but I’d also like to hear about Leah’s relationship a little bit. Like. Do they ever go out?

Kailyn is meeting with her friend Wendy before going out to see her sister. She uses this opportunity to plug her hair line. It’s been two years since the sisters have seen each other, and everything ended okay. But that was literally the last time they even talked. Not even a text? Kail says that all of the kids have similar names. She’s Kailyn, her sister is Michaela.

Now, Nate’s moment to shine. I guess he dropped his son off and Jenelle said not to worry about the call. Nate actually thinks that Jenelle is lying, and believes that nobody is watching the kids. His girlfriend thinks the call is genuine. “Everyone can tell that Jenelle’s in an abusive relationship right now,” Nate says.

I just checked, and Jenelle hasn’t tweeted since the end of 2018. That seems stupid and insignificant, but it’s 2019, and it’s a real sign that something is going on.

Nova is practicing gymnastics, and it’s too sweet. Meanwhile, Briana is hanging out with John the chicken guy. They meet cousin Jeudy. Briana says that she does Teen Mom for a living and then also timeshare stuff. She states the family can’t watch the show, with a nervous laugh.

The two talk about how they met in a chicken restaurant. “You guys are weird,” Jeudy’s girlfriend (I think?) says. They eat oysters. Kind of. Briana does, John refuses. He just puts a finger in it, and is like “Nah.” 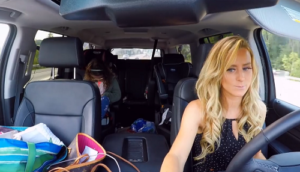 Leah’s at Nationwide Childrens with Ali, who supposedly scores even higher than her last visit. Leah says Ali has been pretty stable, and hasn’t been extremely sick. She uses the powerwheel chair, which helps her energy.

During the big meet-up, Kail realizes her sister is actually pregnant! They talk about their dad. She says that even though the meet-up was awkward and awful, Kail would totally accompany her sister to meet their dad, who she hasn’t seen since five if she’s curious.

But since a baby is now in the picture, Kail wants to build the relationship even more. A cousin!

Jenelle agreed to film for one day with Barbara and Jace and Ensley. Babs goes right into it and asks about the call. Jenelle says they had a bonfire and invited their friends over, and she called David at some point to get more stuff at the door. She was drunk and screaming at him for not answering the phone. But then they both fell in a hole? And it was a big misunderstanding. Sure, Jan.

She said she didn’t want a big commotion so just went to the hospital, no ambulance because the kids were asleep. “It was just a misunderstanding,” Jenelle reiterates.

Leah talks to her boyfriend outside now about the appointment, and how it went well, and BOOOORING. Again, mad props to Ali. She’s amazing. But these “conversations with new boyfriend nobody knows” can get tiresome.

John, who’s being referred to as “Briana’s Date,” takes her on a surprise date to Coney Island. “I haven’t been here since I was like, seven!” she says. A song by some dude named Zayde Wolf plays in the background, and I wish that was a typo. Nope — Zayde. Briana and John hug and Briana says she wishes Nova and Stella were there. And that eventually, John would actually meet them.