Hey, welcome back to Teen Mom 2! The episode starts up with a very cute father-daughter date between Nova and Devoin. They go to Monkey Joe’s, which looks like a very clean and much dimmer Chuck-E-Cheese’s. Nova is about to start first grade, and where has the time gone? 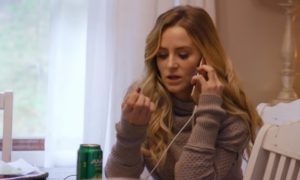 Speaking of first days, Leah asks Corey about Ali’s aid. She likes her, which is a relief. Leah complains once again about how they didn’t take the wheelchair, especially because it was promised. She mentions bringing an attorney into the mix who knows more about special needs.

Meanwhile, on Chelsea’s Land, she’s very pregnant — 33 weeks — and still is wrangling the animals. She starts feeling like she may be in labor since her butt is wet. But nothing else about what she’s going through indicates labor. “You never want to overlook things,” Cole says. So, they decide to go in.

Jenelle was stuck in a hurricane without power for like, five days. But that was her call to make. Things leaked, but the kids were fine. They just didn’t like the fact that they couldn’t shower or use power. But the good news is, they got to bathe in the pool. Barbara says that was very smart.

Based on when the Kim Jong Un thing was happening, Jenelle said they became Doomsday preparers and are “prepared for anything.” Uh.

Now time for Kail. She’s sage-ing her home to get rid of negative energy and admits it smells a little like pot. She’s not really “defined” with Chris. They’re not in a relationship, but he’s the one person she’s never gotten over. But she doesn’t know for sure if he’s dating. “Why do I stay? I don’t know,” Kail admits. If she could control things, she’d want to have a family with Chris. She may be addicted to him! And the chaos! And the chase!

Over at Briana’s, sister Brittany tells her she has the “soul of a fat person.” Then they talk about how Devoin has his own apartment now, and that they need to put any sort of differences aside for Nova.

Now, Chelsea’s mystery. Is she really in labor?!? Or did she just sit in a wet spot!? Cole and Chelsea hold hands in the car while Chelsea has intense contractions. Chelsea is weirdly cool about all this. Even though she says “I’m scared,” she still looks cool. And she’s wearing a Mom AF shirt, which is probably the best shirt to go into labor in. But we have to wait, because now it’s time for Leah to talk about her attorney!

Ali deals with an Individual Education Plan, called an IEP. Leah explains this, and having an advocate, with her new boyfriend. She talks to the attorney about how Ali gets a new aid every year, which is tough, and how the bus didn’t transport the wheelchair. All Leah wants is for Ali to be comfortable, and be in a good learning environment.

At Lux’s party, Chris and his family did show up — but they left since he didn’t want to be on camera. Kail is still very happy about it and showcases a towel she got to celebrate. But, now it’s time for her podcast. This time she’s recording with Catelynn and Tyler. Remember them, from Teen Mom OG? They’re like, separated now. I didn’t watch the other Teen Mom season. Bristol and Cheyenne were too much.

Kail talks about her mom with her producer, and says she’s unaware of her mom, but that she knows her mom isn’t safe around her kids. Her mom is an alcoholic and often disappeared for days. She met Lincoln when he was maybe around 7 months, and never met Lux. So, she wants to talk to Tyler about all of this, since Tyler can relate. Tyler has Butch, and Butch is… a mess.

Jenelle takes the kids to the pumpkin patch, and they find some “GOHGEOUS” pumpkins. (Yes, Barb was there too.) Kristen the producer states that David texted her during the visit and pretty much threatened everyone. How dare MTV film a moment he wasn’t at! Jenelle laughs it off but then feels a bit weird about the whole encounter. Probably because he’s an asshole, Jenelle.

In the car, Nova says she wants to be a “gymnastics” when she grows up, but maybe also a ballerina. She also corrects Briana. Yes, it’s her first day of first grade but not her first day at that school Come on, mom!

They actually allow filming at Nova’s school, which is weird. Sure, everyone’s face is blurred, but. Nova sheds a few tears. But she gets some family hugs and kisses before the DeJesus family departs. “She has separation anxiety,” Briana’s mom says. But, Briana looks like she’s near tears too. 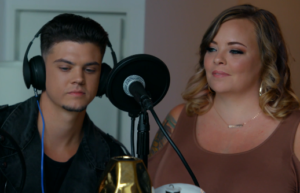 Tyler and Catelynn arrive at the podcast recording, and Kail preps Tyler beforehand. They’re all around a small table for the recording. Kail says that when her mom is sober, she’s a great person — and she’d love for her kids to experience that. Tyler said that what made him not as angry was doing work within itself, and also recognizing that addiction is a disease. “I can’t really change people’s behaviors, I can just change my reaction to that behavior,” Tyler says.

Guys, great news. Chelsea was not in labor. It was just a false alarm! “I feel so much better in my life,” she says. Supposedly, her body is just getting ready to give birth. “I swear that chair was probably wet,” Chelsea says. But she was also “producing some things” and “leaked,” per Cole.

Nova’s back from school! She only had recess for a little bit. She admits she got rid of feeling scared and started feeling excited as the day went on. Then Nova admits she liked hanging out with her dad, and she could visit him whenever she was ready.

And now? The Jenelle 911 call. She says her husband just assaulted her. “He pinned me down on the ground,” she cries. Her husband is still in the house and got violent since he was drinking. She feels like her collarbone may be broken. She has four kids in the house and doesn’t know what to do.

MTV leaves that as a cliffhanger. So, we’ll see what happens next episode.