Hey! Welcome back to Survivor! This season has four people coming back, including scaredy-cat David, hot-but-I’m-also-tired-of-him Joe, blah Aubry, and someone else. Oh, Kelley Wentworth. David is the only one who’s only been here once before. It’s Survivor: Edge of Extinction. And Jeff Probst seems to know how this will all play out. He thinks it’s going to be a great season.

Both tribes, each which include two oldies, have to fight for food and resources.

Part of the Manu tribe is Rick, who’s a news anchor and a bigass fan. He’s watched since season one! “I want to break through the wall,” he says. David and Kelley kind of bond together, especially since they may already have targets on her back. Kelley wants to have genuine relationships this time around, which is tough since she trusts nobody. 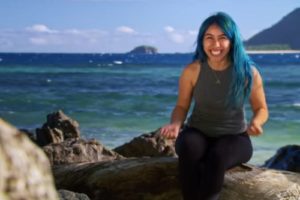 For David, at first he was kind of like a scared camper, but this time he’s like a cool camp counselor. Or at least, a camp counselor. Wendy on Manu has Tourette’s and a little bit of OCD. “If I talk about them, they act up a lot!” she says, regarding her quirks. She also makes bird noises. She’s comfortable talking about it, which means we’ll probably be hearing about it all season. I can already picture Probst practicing his “You made the final three, with Tourette’s!” speech at the finale.

Let’s talk about Joe. He knows he’s amazing, but doesn’t want to play that kind of game. His hair is long and stringy, and he and Aubry are quick to make a fire. “Having Joe on our team means I’m better set in this game,” some lady name Aurora says. Now that he’s on the tribe, she won’t learn how to make fire! Okay. 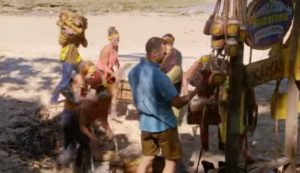 Julie also has no outdoor survival skills. But she did pee in the bushes in Central Park once. Their tribe is called Kama, by the way. It sounds like “comma.” One dude named Ron in there already has a secret advantage but hasn’t found a good moment to actually read it just yet. “Dig three feet east of your tree mail,” it states. He does just that! He gets an Advantage Menu, with options. But, it has no use after the third tribal. Suddenly, finding this inspired Ron to play the game well.

It’s Day 2 at Kama, and Joe and the gang are trying to figure out what “Edge of Extinction” really means. Aubry’s method for success is to lay in the grass and come out like a snake when the time is right, or something like that.

Gavin, the YMCA director, is here to win. Gavin bonds with Eric, the firefighter, and Eric thinks the two of them are thinking along the same lines. They’re aiming to get rid of Aubry first.

Back at Manu, Sales Rep Reem thinks everyone’s working hard and everyone’s doing well. In her eyes, at least. The other survivors, like Lauren, are a little worried that she keeps moving everyone’s stuff around. She’s being a real mom, and momming up the game too much. Keith, who’s 19, actually appreciates Reem. Because he’s a mama’s boy and misses his mom. Reem says she’ll be there for him, but he better not get soft. Reem even offers to help him learn how to swim.
Card

Also? This pretty much proves that Keith is weak at swimming. On day two! They haven’t even had a challenge yet!

Speaking of, now it’s time for the first Immunity Challenge.

This challenge involves rope climbing, bell ringing, and knot untying. Also, a lever and a crow’s nest. And of course, a puzzle.

It sounds challenging. I feel like if I were a contestant, I’d forget what to do after the second step. And that, plus the fact that I get winded easily, is why I’ve never applied for this show. (But at least I can swim.)

The teams are even, meaning that at least it’ll be a good show until they swap tribes. Things seem pretty equal until Kelley totally slips off a beam and falls, gashing her head. It looks bad, but she swears she’s okay.

The puzzle this time around is life-sized and very heavy. Kama once had momentum, but fall apart a little bit. Still, it’s very close. “This challenge has taken a toll on a few bodies!” Probst yells. But it’s Kama who wins. They also get flint. Manu looks disappointed, and Probst is all like, “this game is hard!”

The targets are on the girls, especially Lauren for some reason. But, Reem’s name is tossed out there too. Because she’s older and a mom. Wendy doesn’t think Reem is getting enough credit but thinks she’s definitely pulling her weight around camp.

And, holy crap. There’s a person named Wardog on this show? WARDOG? Anyway. Wardog doesn’t like that Wendy spoke her mind, and is now gunning for Wendy. Reem knows her name is being thrown around and thinks it’s ridiculous since age aside, she can “kill it!”

In case you didn’t know, fire represents your life. And the music is… weird?

When your fire is gone, then so are you. Probst asks Reem if people seemed to pair up, and she said it was just people doing their jobs. She’s already pissed. Probst notes it, and Reem is like “there’s no reason why!” It’s age discrimination, in her eyes.

Her Survivor tribemates talk about how she moved their stuff around and reminded them to drink water and wear shoes. Wendy actually likes Reem, since the things the other people don’t like are the things she does like. She misses her mom, so having Reem around helps.

You guys, it seems like it may be unanimous Reem. Probst is like “Hey lady, someone needs to be the first.” It’s true.

Reem, Kelly, Wendy, and Lauren all get votes. Wendy and Reem tie it up, but it’s Reem who’s going home. It’s a shame since she could have been a total badass. “I hope it pours down rain on these people,” she says. “So lame.” But then? She sees signs!

“You have a decision to make,” they say. One path leads to the end of the game, another involves a boat ride back for a possibility to re-enter the game. Good for Reem!

It’s dark, and Reem only has a small torch. From what she learns, she’s on an island with.. nothing. The shots are spooky.

“Holy crap. What is this?” Then, credits roll. Dark, Survivor team. Dark.