It’s Teen Mom 2, and Jenelle may lose everything she has! Wait, no — that was last week. This week, Chelsea’s producer checks on sweet baby Layne. “This time, I grabbed her but I did a lot more,” Cole says, about Layne’s birth. Supposedly Layne was slippery. I mean, umbilical cord cutting I get. But… baby delivering?

Aubree was very happy meeting her sister for the first time. Watson, at the moment, isn’t super impressed.

Kail is still keeping her distance from Javi and Lauren, even though they’re all at Lincoln’s soccer practice. Over at Javi’s place, he and Lauren have a dull conversation about how she still has yet to talk to Kail. Javi isn’t worried so far. Lauren has been working out the whole pregnancy. Good for her.

Over at Barbara’s house, Kristen the producer says that Jenelle has pretty much ghosted. It’s hard for her to film her life when her husband isn’t included. In case you forgot, David was fired from the show and won’t be filmed. Jenelle says that the producers just don’t know how stressful that is. For Babs, she thinks David is still a little mad over being fired. “I don’t talk to her about David,” she says. She just wants to keep the peace.

Stella needed emergency surgery for a weird bacterial infection, which Briana noticed after she had trouble moving her arm. Poor girl. It was septic arthritis, and Stella will be at the hospital for a couple of days. Nova doesn’t really know what’s going on, even though it’s been explained.

Nova gets to FaceTime her mom and “Stellita” from the car, and that seems to make things a little better. I’m guessing Briana wasn’t able to film at the hospital, thus all these grandma scenes.

Leah is still dealing with her flood damage. But the good news is, Jeremy is home from some time on the road, and Addie is super excited. They go to a place called Scissors for a haircut together. Oh wait, no — it’s where Jeremy’s mom works. Jeremy is getting a haircut and this seems really boring. Even Addie pretends to fall asleep. 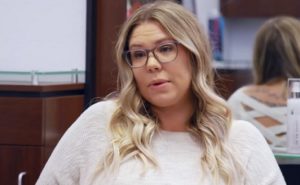 Kail tells her kids they’ll soon have a little girl cousin. They don’t seem too excited, but Kail is. Probably because focusing on her sister’s kid means she doesn’t have to focus on Javi and Lauren. “I just don’t care to talk to her,” Kail states.

“Lincoln and Isaac met my sister before but they don’t remember her,” she tells a friend. She’s hoping that the shower will help bring the two of them closer together.

Briana’s been at the hospital with Stella for three days, which she admits has been hard on Nova. Stella had surgery which made her very cranky. It’s lucky they brought her in early. “I just can’t wait for her to get better so we can leave,” she tells her mom on FaceTime.

Speaking of surgery, Watson needs to get tubes! She talks about it with Cole, and they’re both wearing hip word shirts. Cole’s is about Crossfit and Chelsea’s says “Thug Wife” which, not really girl. Still better than Kail’s University of Motherhood hoodie.

Now, Jenelle. Hey, she’s filming! She’s meeting with her mom and Jace outside. Jenelle asked MTV for some “fucking respect.” It’s okay if she’s not on MTV since she has other shit she’s working on. Sounds like Farrah!

Jenelle is mad about the online haters. “This’ll probably be my last season,” she states. She says the audience doesn’t see the real her.

Nova’s been a very good big sister based on everything that went down. She visits Devoin, along with Devoin’s roommate Dre, who’s 24 and probably didn’t expect MTV to bust in. “It’s just me and Voin,” he says.

Back to Leah. She’s worried about Addie. Addie talks about how her dad works on pipes at school. She excitedly decides to call Jeremy, even though he’s at work. But, she got to tell him she loved him, and that’s good enough for right now.

Kail’s feeding the kids and trying to plan the shower with her sister on FaceTime. She’s psyched as it’s a girl. She’s, personally, surrounded by boys. She thinks it’d be nice to have a girls brunch and is way too excited. She shows off the kids, and they’re all shirtless and shy.

While she’s eating pierogies, she tries to feed one to Isaac and he’s not into it. “It’s potatoes!” Kail exclaims.

Chelsea and Cole go to drop Watson off at the hospital for his tubes. Cole is too emotional to leave the car since he “just doesn’t want to see him there.” So, Chelsea does it. And the surgery is a success, but Cole still cried a shit ton about it. “Watching him, that was the biggest mistake,” he says after it was all over. “He probably hates me now. But it was all very fast.”

Devoin and Nova are having a great time together, but alas — it’s time to say goodbye. He tells her he loves her, and Devoin is kind enough to say “let me know if you need anything.” Watch out, Tyler and Gary — this dude may eventually dethrone you guys as “best original dad.”