Hey, welcome back to This Is Us! It’s been two weeks since we’ve seen the Pearson fam. At last glance, they met with Nicky and realized he was a hot mess. So, let’s do this thing.

The Big Three take Nicky back to their hotel room since he’s literally on the verge of suicide. They offer him some Pringles, but all Nicky wants is a little bit of sleep.

Kevin, Randall, and Kate gather together to figure out what to do. “We could probably throw him some cash to make the place a little more livable,” Kevin states. Kate says he’s been living like this for years, but Kevin makes sure to state that he’s family and they need to help him out.

The next morning, they gather again. Kevin called Rebecca, who took a little bit of time to process the news. But they can’t talk for long since Nicky meets back up with them. While they try to make a gameplan, Rebecca meets up with them and confronts Nicky directly. “I’m Rebecca,” she says. “I was Jack’s wife.”

She didn’t even think about the big meet-up. She just knew she had to be there. “You have his eyes,” Rebecca says. Nicky states that Jack showed him a picture back in the day, and he seemed very happy. But it’s all pretty heavy for him. And probably Rebecca too, since in the words of Jeff Probst, she was blindsided.

Flashback to Jack and Rebecca in bed. Jack is supposed to get Kevin’s baseball card signed, but Rebecca says she’ll take him instead. He just needs one day. But the kids still bombard Jack the morning of with inquiries. The kids can tell something is wrong, but Rebecca puts on a strong parental front.

“I remember that weekend, I do,” Rebecca says. “It was right around Valentine’s Day. He was acting so strangely. Huh.” Kevin thinks that Nicky really needs to check out the Vet center. Since old men set in their ways will suddenly change when a virtual stranger tells them to.

It’s around that time when Randall drops out. Beth is going through too much with her unemployment, and pretty soon, he’ll be in office. Kevin snaps at him saying Randall makes time for everyone else, but Kate gives the “come on, dude” look to him and he quickly apologizes.

Randall and Kate drive back, with Kate lamenting that she had no clue what was going on. “That’s because we were 11,” Randall says. They both remember that that weekend was the same time they had the sequins fight. Sounds like a cleaning nightmare.

Randall persuades Kate to swing by the old neighborhood. The house isn’t the same, but the yard and the street and the neighbors are. 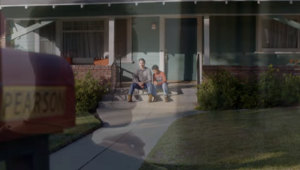 While making Valentine’s, Jack needs a breather outside. Randall comes out to join him, simply resting his head on Jack’s shoulder. Kids — they know more than we all give them credit for.

Nicky heads inside the Vet community center and gets incredibly uncomfortable. It seems to drum up some PTSD memories. “I appreciate the effort, I do,” Nicky says. “But I’ve been to counselors before, and it didn’t work.” Also, he’s a drunk who can’t leave his trailer.

Kevin is very upset in general, especially since Jack’s lie prevented him from ever knowing his uncle. “It’s hard to be mad at somebody who’s not here anymore,” Rebecca admits.

Cut to the card signing. Rebecca tries to get Kevin out of the line to grab lunch, but Kevin protests. Rebecca does the “I’m not asking, I’m telling” thing, but Kevin stands his ground. And honestly, good for him. He wanted this moment.

Kate and Randall try to visit the home, but according to the woman, it’s a “bad time” and shuts the door on them. “Almost all the houses on this street are completely different,” Randall states. To help the moment, Kate says that the day of the sequins fight was also the day they invented the Pearson pizza. With that, the young girl of the house knocks on the window and invites them in.

Back in the sad timeline, Randall tells Jack they’re hungry and Jack asks him to take money out of his wallet and order something for everyone. Randall, worried over this, gives an “okay.”

In the present time, Kevin is checking out Nicky’s trailer. He gives Zoe a call (remember her?!) and tells her he may not be home as early as he thought due to the status of the trailer. But then, he pauses. He sees something!

Kate and Randall get a big apology from the rest of the family, and the two admit they don’t even know what room they’re staying in. Kate can’t believe she’s in the same spot as the sequins fight. Cut to a moment where young Kate is all “Ho-Lee-Crap” over ordering a pizza, and Randall calls in saying he’s “an adult” while placing his order.

But Randall recalls that Kate doesn’t remember one thing. The plate. Jack comes back in and says they both made a huge mess, and then he gets so upset that he throws a plate at the wall. “It slipped out of my hand,” Jack tells them. “Go get me the broom.”

Kate doesn’t remember that at all. Weird for them to have a weird confrontation about this in front of the other family, but okay.

“When I found out that you were alive, I didn’t want to meet you,” Rebecca tells Nicky. She didn’t want to unravel what she knew from Jack. Instead, she asks him about his childhood, and he admits it wasn’t a childhood worth remembering. Nicky says that Jack only told them he died since he wished he was dead. Rebecca thinks that if Jack didn’t die after the fire, he would have found his way back to Nicky. “You still have a chance to make things right, because I’m here. And his son is here,” she says.

Back at the baseball event, Rebecca walks in on Kevin talking to the player very enthusiastically. Kevin tells her he just signed his card, but when bumping into the player, he says the conversation was so much more than that. Kevin did his research. Even though Kevin seems confident on the outside, he’s very fragile underneath.

Already, Kevin sees Nicky as family. But, that worries him. “I’m not a prop, Rebecca,” Nicky says. But Nicky sadly sees Kevin as a tall blonde kid who pulled him from his home.

Standing outside the house, Kate is wondering if she misremembers her childhood. “We all have bad days as parents. I’ve had some doozies, and you will too,” Randall says. He says that as a parent, all you can do is pack each day with as much good stuff as possible and hope it sticks.

Back in that timeline, Jack — holding a piece of pizza — apologizes to the two of them and says that the pizza they ordered is actually fantastic. So, it needs a name. Pearson pizza it is! It even warmed him up to spinach.  Then, the sequins fight happens. In today time, Randall puts his arm around Kate. 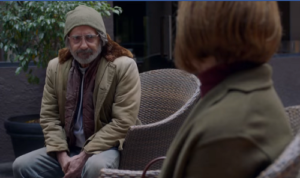 Now, more Rebecca and Nicky. She apologizes for invading his space. In turn, Nicky tells him about their childhood. Jack was really big on building, and could literally build anything. “Tongue and groove. That’s what he’d say. I didn’t know what the hell he was talking about,” Nicky says. He used to be a person, and he wishes he can be that person again, but it’s been too long. “You guys are all I ever wanted,” Nicky admits.

With that, he knocks on Kevin’s door and asks him to come with him. Uncle/Nephew Adventure Time!

Eh, kind of. He asks Kevin to fix his trailer a little. “That oughta do it!” Nicky says when Kevin’s all done. “You don’t need to worry about my roof anymore.”

He then admits he’ll go to at least one meeting at the Vet center. Not two, just one. Things are still a little painful for him. “It’s a pleasure to meet you, and maybe I’ll see you again,” Kevin says with a handshake.

Back home, Randall finally arrives home and gives Deja and the other girls a kiss. But Beth needs to head on DC right now based on a relative’s broken hip, so the two don’t get much time together. Connecting with the kids, his bag is heavy with presents. Like what? Shit from Nicky’s house? 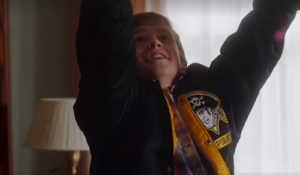 Kate arrives home and gives Tobey a kiss, and tells him all the wonderful things she wants to do as a family once their son is born.

Coming home from the sequins fight, Rebecca states she’s not cleaning it up. But, encourages Kevin to take part. In the present day, Rebecca tells Kevin that she’s very grateful for him. But.. what did he see in the trailer from earlier during his call with Zoe?

It was a box. Surrounded by a bottle of whiskey. Which… Kevin drank. A lot of. Thus, his mom’s words 0f encouragement were kind of meaningless.

Hi there! If you liked this recap, thanks. Consider following Best Recap Ever on Twitter (@bestrecapever) and on Facebook. It’s literally a one-person operation, so all support is amazing and appreciated, and I’d hug you all if I could/you wanted me to.