This week’s episode of This Is Us starts in Vietnam. Even though Jack tries to include Nicky in activities, there’s still a weirdness there. He can’t straighten Nicky out in the two weeks he promised. “Nicky, I know it must be a lot for you right now without any drugs in your system to push it all down,” Jack tells him. Nicky sasses him back, and the two get in a physical fight. “I got 48 hours left with you, kid. That’s all,” Jack admits. This is the fall finale of This Is Us by the way, so hopefully, we figure out what the hell happened.

Cut to Kevin. In case you forgot, he’s hoping to make a documentary about the woman who was wearing his dad’s necklace. But he realized it was actually kind of a common piece of jewelry. Since Kevin is seen as Manny royalty in Vietnam, he has a lot of people at least helping him out.

Kate has her second good ultrasound in a row, and her NIPT came back normal. Unfortunately, her “Adele-a-gram” job will have her sitting a lot to drive long distances, which might not be good for her blood pressure. She’s not told to quit her job, but uh. She may have to.

Trouble In The Pearson House

Randall gets summoned by Beth to talk about the campaign. Tess storms by, and Beth notes to Randall that their sweetpea has not been as sweet as usual. They also learn that Deja communicated with her mom, which is big news to them.

Back in Vietnam, Jack tries to give Nicky a pep talk. They need to do their tour, stay alive, and then they get to go home. Nicky just needs to stay focused.

Kate takes a walk with Madison, who says that maybe she can just walk to her Adele-o-grams. But since that’s not going to work… maybe it’s time for another job. She’s working at a school that’s looking for a chorus teacher, and it actually sounds like an ideal gig for Kate.

Randall gets ready for a political thing, and Jaewan takes the girls out of the room so that Beth can give him the ultimate pep talk. “You are fierce, dignified, and in top form,” she tells him. Present-day Rebecca is driving Tess into the debate after her gymnastics class and tries to talk to her about middle school. She asks if she had any “issues,” and Tess immediately assumed that Kate told her. And uh. She did. But she didn’t tell Randall and Beth. “Grandma, I don’t want to talk about it,” Tess snaps. “If I wanted to talk about it with you, I would have told you.” 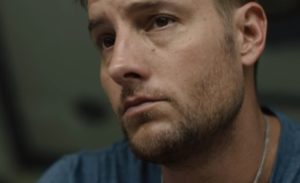 Kevin and Zoe meet with a local historian, who takes them on the same grounds where Jack once was. And we know that for a fact, since they spliced together walking footage of both timelines. Kevin gingerly touches his necklace.

In happier news, Kate meets with the Principal and hits it off. She admits that high school was rough for her, but that chorus was the one class she looked forward to. But then, the Principal admits that he can’t bring anyone on without a college degree. Kate never graduated, so she’s immediately eliminated.

At the debate, Randall gets roasted by Solomon Brown for not living in the area. He also gets interrupted the second he mentions investing in the community. It’s a little embarrassing.

Nicky is seen stealing some sort of medication from another soldier. The morning of, Jack finds him by the water pretending to shoot at people with his fingers. “What are you doing? Are you high?” Jack asks. The answer is yes. Jack is mostly concerned about getting Nicky clean again. “I see it all again when I’m clean,” Nicky admits.

At Kate’s house, Toby thinks that she should focus more on relaxation and less on work. Kate admits that part of her thinks the baby isn’t actually coming. And she thinks Toby feels the same way since neither of them wanted to know the sex of the baby, which was available at the scan.

But then, he steps off stage. And gets real with the audience by sitting on the stage and talking about the complaints the town had. One person had a complaint about water a year ago. That’s the stuff he’ll actually be fighting for. And finally, he wins over the audience. In true “Randall from This Is Us” fashion. Brown is just standing up there on the stage like a dope while his job seemingly disappears in front of his eyes.

Kevin talks to the historian about stuff and it’s actually kind of boring. It’s about how their fathers were enemies but had great war stories, and now everything is okay. Cool.

Back at the debate, Tess is super awkward around Rebecca. Rebecca tells her that she’s had pains in her neck, wrist, and back, and has had them in her 20’s. She felt like she had so much pain and had it bottled up so much that she’s paying for it now.

She’s kept secrets from Randall and Jack, and it caused a headache or upset stomach but turned into a full-on ache. “I don’t want that for you, sweetheart,” she says. Tess is her first grandbaby, and she loves her so much and hopes she won’t be popping Ibuprofen someday due to her inner turmoil.

Toby talks to Kate and thinks she needs to finish up school — for their kid. Their kid, who’ll come safely and in good health. “Where’s the bursar’s office?” Kate jokes. Toby asks who the bursar is. So hey, Kate is already ahead in verbal and campus lingo. 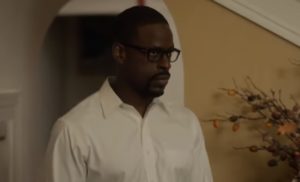 Sad news for Randall — even after a wonderful debate, the numbers still aren’t there. Jaewan says he’s not going to win it and is sorry.

Back at home, Deja appears in the kitchen and admits she wants to visit her mom. She lives in Delaware now, and supposedly has a job. It’s going to be complicated, but they can do it. Then Tess pops in. “I’m sorry I’ve been so weird lately,” she says. “I just… I feel uncomfortable around  you guys all of a sudden.” She says she has a stomachache all the time and doesn’t want to keep secrets. “Lots of girls have boyfriends. But, I don’t want one… it’s because I think I might like girls. Not boys.” Randall and Beth seem shocked. Tess admits she didn’t want to tell them since she didn’t want it to be a thing. Randall says that as her parents, they’re here to help her. “We love you, no matter what,” Beth says.

Alone with Beth, Randall admits he didn’t see that one coming. Beth tells him he’s sorry about the campaign, but maybe it’s a blessing. “It’s not over till it’s over,” Randall says. He still doesn’t want to give up. Beth thinks it’s not the time for him to continue on, especially with what’s happening with Tess and Deja. Even though the family is his biggest priority — and he made the promise to Beth that he’d quit if things got to be too much — he tells her he at least needs to see this through. 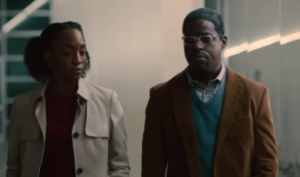 Time for Vietnam. Nicky is missing, and Jack can’t find him anywhere.  Suddenly, they all hear a gunshot. Jack, worried, runs to try and find him. That scene mixes with Randall and Beth being apart, followed by Adult Tess and Way Older Randall asking if they made contact with her mom. So, they might be separated? As for Kate and Toby, they have a gender reveal among themselves via cake, and realize it’s a boy.

Back to Jack! He dives into a river slow motion. But according to the historian, Nicky supposedly didn’t die in the war. “His name’s not there. He may be dead, but he didn’t die here in Vietnam,” he says. Uh. He may still be alive? We’ll find out in January when This Is Us returns!