Right before the credits on this week’s episode of This Is Us, Kate knows something’s up with Toby. Maybe it’s the fact that he’s sad and in bed. But even a light walk won’t motivate him to get out, meaning that his depression is in full swing.

Cut to back when the Big Three were kids. Jack comes home wearing a hat funny, trying to hide a black eye. Rebecca freaks a little bit, even though Jack says sometimes the guys at the gym brawl for fun. The guy who hit him was named Stuart — a name that doesn’t really match with “brain damage.” “Punching bag only,” Rebecca lectures.

Present-day Beth is calling a place where she applied to try and get some follow-up. She even uses the phrase “super duper,” which should indicate how things are going. Randall is trying to figure out what colors to wear, since despite a really poor showing at his first public event, he’s still running for Councilman of Philadelphia. The girls also have a dilemma — they need to sell some Girl Scout cookies. Usually, they sell well over 100 boxes at Beth’s office, but, well, you know. Bonus revenge — her past coworkers are now out of a Thin Mints connection.

Kate, distracted by Toby’s illness, barely notices that her dog Audio (remember him?) is eating trash. Particularly bad trash. This might not end well.

Now, a Zoe and Kevin plot. He’s still curious as to who the girl is in the picture with his dad. Zoe thinks he should just stop thinking about it. This isn’t about you, Zoe!

Back to Jack’s black eye. Randall approaches him in the kitchen and asks him to teach him how to box. There’s a bully at school named Dylan who pushed him into the lockers, and he wants to learn how to defend himself without being a snitch. Present-day Randall is in church, lead by Councilman Brown. visiting from Alpine, New Jersey. He gets called out as being new, and mentions that he’s actually local based on the building his family owns. Even though Councilman Brown can very easily call him out, he welcomes him no matter what. “Welcome to our neighborhood,” he says.

Beth tries to set up the cookie stand outside of the grocery store, but alas! A troop is already set up there.

Kevin calls Randall to try and meet up, and Randall is all like, “uh, I don’t need you here to make my image worse!” Not exact quotes, but it wasn’t flattering. Kevin comically states that he has no boundaries and will be visiting him in Philly no matter what. Back at Kate’s place, Toby notes that Audio isn’t eating bacon and knows something must be up. He actually gets tense with Kate for not watching him more thoroughly. Since it’s apparently really easy to stop a dog from eating something directly in front of him, right Toby? Come on, dude. Have you ever owned a young dog before? (I should lay off of him, I know he’s going through some things.)

Jack tries to teach Randall to box in secret, but OOPS, Rebecca walks in! Cut to Randall today, trying to hide Kevin from the public. Taking him to a restaurant, Kevin shows Randall the photo.

“He gave me her necklace, right?” Kevin asks. “That must mean something.” When asked why, Kevin confides in Randall. He notes that back when they were five, they were playing and found a spot on the wallpaper that was peeling. They kept peeling just because they could, until half of the wallpaper was gone. “It just blew our little minds that there was wood paneling,” Kevin said. “…I started peeling.” Since The Manny is the #1 show in South Korea, Kevin gets free food from his Korean waiter. Star power!

But, that’s a big clue for Randall. He notes that a lot of the Korean population located in Philadelphia aren’t registered to vote. So perhaps with Kevin, Randall might actually have a chance. Again, star power!

Kate is still upset about Audio and doesn’t know what to do. There may be an obstruction, or it could be nothing. So, despite being 38, she calls her mom. Rebecca says that she’d bring Audio home, as Kate would have more control over the situation. When Kate jokingly asks Rebecca to move in for her good advice if her baby situation stabilizes, Rebecca notes that Kate will need to make a lot of decisions for her little family throughout her life, and she needs to trust that most of her decisions will be right. It’s a nice little empowering chat. 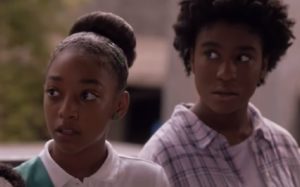 Beth screws up yet again with her Girl Scouts. Not only does she take the girls to a mostly abandoned commercial lot, but she wrecks their one sale by forgetting to bring the swiper. Otherwise known as the bit for your phone to accept credit cards. She gets some negative comments about being a bad mom, and that’s where the “shut up, Shut Up, SHUT UP!” clip from the trailer comes in.

Past-Rebecca calls up Randall’s school and finds out that Randall lied about the whole thing. There aren’t any new students named Dylan, so he made up the story to spend time with Jack. Speaking of, Jack confides in Rebecca by saying that boxing helps him mentally. It quiets things for him.

Toby, on the couch, finally decides to pick himself up and take a shower. And Beth feels better too, after Deja approaches her. Deja gives her a Randall-style monologue. She refers to Beth as exceptional. “He loves you like he’s in a Disney movie or something,” Deja says, regarding her relationship with  Randall. “But if you’re sad, you should talk to him. He’ll tell you you’re exceptional.”

But he can’t right now, since he’s busy registering Koreans. And in the process, he actually gets called out by a young guy who is well aware of his Manny-promoting tactic. “Dude, you’re so transparent,” someone says. “You’re right, I’ve never been in this neighborhood before,” Randall says. “But I’m here now.” He mentions that he saw empty storefronts, badly patched potholes, and a guy who carried his bike wheel to prevent it from being stolen. “If you’ll talk to me, I’ll listen.”

I’m sure you’re curious about Audio. Well, he ate a rock. But he should be fine, and will just need to poop it out. Kate is so happy that Toby got dressed, and said it was a good sign. But Toby said that he still feels sad, and is now afraid that Kate will leave him. “I tried my very hardest today, and, I’m sorry,” he says. Kate states all three of them should go on a walk, especially since Audio looks like he has the need to, er, eliminate. Eventually, Toby agrees.

Kevin is hanging around Pearson Councilman headquarters, and states that Randall is pretty remarkable for running no matter what. In response, Randall gives him permission to “peel the wallpaper” and learn more about Jack.

Speaking of, Jack talks to young Randall and admits they know there’s no Dylan. “I wanted you to teach me how to box,” Randall says. “So you made up a fake bully?” Jack asks. Randall just wants to be more like him. Randall states that while he knows he’s Jack’s son, Kevin got DNA stuff from him from being biological. So he needs something. “First of all, you are my son son, okay?” Jack states. He says Randall’s brain is what’s going to be his secret weapon. After all, he tricked his old man.

The guy who confronted Randall meets with him in his headquarters and says that Randall is the person who inspired his grandmother to vote. For the first time in 75  years. Because Randall cares, and also has nice hands. He offers to be Randall’s campaign manager. His name is Jawan, and he’s hired!

Rebecca presents Jack with a gift after he comes back from talking to Randall. It’s head gear! “If boxing is important to you, I just want you to be safe,” she says. Jack notes that he used to box with Nicky.  They used to stuff toilet paper in the mouths like guards. Rebecca states that hey, he’s won. He needs to teach her how to box now. The two end up kissing! Jack goes on to watch boxing with the kids, which Randall later relates to his conversation with Councilman Brown. It’s about faking it, when you’ve been hurt.

On the walk, Kate tells Toby she’s not going to leave him. She signed on for better or worse. It’s a nice moment. And then hey, Audio poops. Thankfully, they don’t show it.

Kevin shows up to Zoe’s place even though she just wanted some time off, and gives her a present. It’s a Visa application for a trip to Vietnam. He’s going to track down the woman and figure out her story, but he wants her to be there with him. “I figured the documentarian in you would dig it,” he says. She agrees.

Meanwhile, back at home, Beth is drinking a tall glass of wine when Randall comes home. Randall tells her about his good day, but knows something’s up. “I got fired,” she says. “I know,” he admits. Beth admitted that she’s pretended she’s fine, but she’s not. “Why didn’t you say anything?” Randall asks. She admits that he’d be overly positive, but perhaps not rightfully so. After all, her resume is out there and not much is happening. Randall asks her to join her campaign. He needs a strong team, and she’s the best teammate there is. “Anything we take on, we crush,” he says. It’s not a pity job. It’s a job job.