At the start of This Is Us, we get a whole new flashback — young Rebecca. She watches her mom and dad kiss, and reads a housekeeping magazine about how to be a proper wife someday. As she ages a bit more, she learns how to cook. Sort of. It’s a school class, and she rebels and tries to take woodshop with the boys instead. Good for her. Fun times, being a woman.

“They’ve never seen anyone like you before. And they never will again,” a woodshop boy named Alan says to her. Flash forward a little more, and Alan visits. He’s been thinking about her for three years. “The truth is, Rebecca, I’ve never seen anyone like you, and I never will again,” he states. “You need a new line,” Rebecca jokes. But, it worked last time. They kiss, and Jack sees it all from his car. Heartbreak!

Bummed, Jack hangs with his family in the kitchen and cracks open a drink. His father angrily rejects a sandwich his mom makes, calling it a “pickle parade.” Jack tries to stand up for his mom, but his dad shoots him down again. Just because he went to war doesn’t mean he’s a big man. And hey, you saw what the war did to his brother. Opening credits roll.  Man, a lot happened already. I’m already well over 200 words here.

Now, the present. Kevin looks over to Randall at the movie premiere, and Randall is crying. But, it could also be because last week, Kate stated she was the only one who could pass down a piece of Jack. “Yo, uh. Kev told me about the IVF,” Randall says to Kate after the movie. Kate admits it’s a longshot for sure, but they might as well try. Randall notes what he heard, and confronts her about it.

“I think you’re overreacting,” Kate said after Randall scoffs adoption. “It’s been very, very hard,” Kate said. “You don’t know what it’s like to lose a baby, either.” She runs away crying, angry that Randall made her feel bad over wanting a biological child.

Rebecca meets up with Alan’s family, who are very familiar with her. They’re happy she’s back in the picture, and note her free spirit. She tells them about how she’s going to meet a record producer in LA, but Alan talks her out of it. He has an “in” at the Village Voice in New York City, so they could stay on the East Coast and both follow their dreams.

Randall calls Councilman Brown from the last episode. Remember him? Supposedly Brown looked him up, but Randall is like, “stop paying attention to me, and pay attention to the rec center and all the broken streetlights!” Brown is all like, “Eh, I do whatever.” Not a direct quote.

Randall calls Kate next and tries to apologize. Kate overreacts, especially since she also gets flowers from Kevin. She’s starting to freak out since everyone in the family is acting like she’s going to die tomorrow. Randall grabs his suitcase and decides to fly down for the surgery. Big three!

Thinking about her kiss with Jack, Alan tells her that he promised he wouldn’t ask her to move to New York for at least a week. But she decides to go since New York “has soul.”

Cut to Kate in the hospital. Her vitals look great. While in surgery, they’ll harvest Toby’s sperm to make some embryos. Kate tells Toby that if she dies, she wants him to move on. But not with the girl he works with, and not with Madison. He promises he’d find someone else for a happy relationship, but that person will be way less cool than Kate.

Kevin has a plot with Zoe where they meet famed author and NPR host named Terry Gross, and eh. I mean, Terry’s great. Zoe is a bit shady. Interviewing Kevin, and Terry asks him about his father’s experience in Vietnam. He admits that since he was only 17 when Jack passed that he never got to know too much about his experience. He doesn’t know if Jack saw combat, or where he served.

Beth has a meeting with a higher-up named Phil, but it’s not to talk about kitchen co-ops. Instead, after 12 years of work, she has to be let go. Supposedly it’s a budget issue, and they had to let go of someone from the senior staff. He said it was only based on numbers, and admits that as of right now, Beth is less valuable. It’s not based on who he likes more.

As Kate counts down for the anesthesia, she has flashbacks of the miscarriage. Then, she dreams she’s in the hospital ward, seeing the big three as babies. Then, next to the three of them is an empty bin with “Pearson-Damon.”  Damon is Toby’s last name, by the way. I don’t think I realized that until right now. 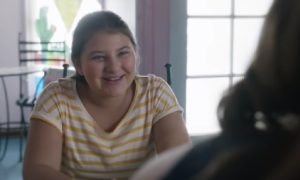 Teen Kate then talks to today-Kate and asks if she really thinks she can do it. “You have been freaked out to have a dog for the last 20 years,” teen Kate says. Then, little Kate pops in. Jack comes in to settle the score. “Hi Katie girl,” he says to today-Kate, who can’t believe he’s right there. Oof, right in the feels.

At the grocery store, Jack runs into Alan-era Rebecca.  She asks what they’re doing on that side of town, and Jack says he’s bringing his mom — who’s in tears — to a friend’s house. Jack explains that he saw Rebecca with Alan, and Rebecca tries to explain that they dated before in the past. She tells him before he leaves that she’s moving to New York. “I have this dream, and I want to give it a shot,” she says. Jack states she should, as she has a really beautiful voice. “Jack, don’t you have a dream?” she asks. “No one’s ever really asked me that before,” he answers. “Um. Right now, I just want to make sure my mom’s okay.” Then, a decent job, with a wife and family. The answer touches Rebecca, who thinks it’s a beautiful answer. Jack says goodbye with a sly smile.

Cut to a scene with William and Beth. William says that sometimes, there should be a time where she’s a soloist and Randall will have to hold down the fort. That conversation makes a lot of sense to her right now.

Learning About The War

Next, a scene where Jack is talking to young Kevin. Kevin is a little salty since Jack wouldn’t let him buy a grenade toy earlier. Jack confides that he was in a war. “A lot of people got hurt,” Jack noted. So, war stuff isn’t funny. Jack asked Kevin to ask questions, but at that time, he didn’t have any. Can’t blame him, he was like… nine. Zoe, who’s dressed a little like Scary Spice (is it Halloween, or is that a coincidence?) says she’ll help Kevin find answers.

Toby and Randall are back at the clinic, and Toby admits to Randall that he never would have guessed he had anxiety based on how cool and monologuey he is. He states he takes anti-depressants. But before they can continue, they get word that Kate is taking a little longer than normal to clear the anesthesia from her body. In her body, she’s revisiting her father and the wonderful memories together. “How great is this? What do you need a baby for?” teen Kate states.

Teen Kate is begging today-Kate to stay, as today-Kate isn’t waking up.  In her dream, present-Kate tells the other Kate versions what her life is like. Teen Kate keeps trying to bring her down. “Dad, I have to go,” present-Kate says. She tells her teen-self that she knows she’s going through a rough spell, but will be okay. “You’re going to be a mom,” she whispers.

She gives one last look to Jack and wakes up. Kate sees Randall. “Am I still high?” she asks. “What are you doing here?”

Randall apologizes in person. “You have so much dad in you, Randall,” Kate states. Even flying cross-country for an apology is the most dad moment ever. They got eight eggs, which is really good. Giving the two of them a moment, Randall calls Deja back after a few missed calls and states he’ll be on the next flight home. Turns out, the councilman not making good on his promises landed someone in the hospital. If this councilman can’t do his job, maybe Randall can! In this big revelation, Beth admits to Randall that she got fired.

Cheering to New York, Alan-era Rebecca wonders if she’s making the right call. Rebecca admits there’s someone else. Even though she doesn’t know much about him, she still has a feeling. She even goes to knock on the door where his mom is staying. “Hi,” she says to Jack. Rebecca saw his car parked outside and thought that maybe she could keep him company. “I feel terrible arriving empty-handed,” she says. Jack asks him about “that guy,” and Rebecca pretty much states that’s off. Jack gets his second chance! Who would have predicted THAT, right? Rebecca is super impressed by Jack’s ability to wash dishes. She spontaneously tells him that they should go on a drive to Los Angeles, and he is all for it.

Next week’s episode is all about Jack’s war story, so make sure to tell your dad.