Welcome back to Survivor! So, the first blindside did one good thing — it woke up MMA Fighter Bi, who now plans on fighting her damndest with her game face. But still, she feels bad. She finds out that it’s Gabby who flipped her vote, which is a little too personal for her. “In a perfect world, I would love to see Gabby go home,” Bi states. 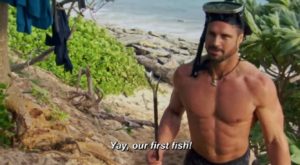 Meanwhile, on Goliath, they catch a baby fish with their fishing supplies. They’re on a total winning high. “Out here, I’m not the Mayor of Slamtown,” says the Mayor of Slamtown. “I’m just me.” He’s getting better at skills like laughing while he’s out. It’s not all about scheming for him, which sounds like famous last words.

Slamtown reiterates that Natalie is still on the chopping block. She’s used to being a boss, but just can’t be bossy on this island. Still, he likes her and hopes she stays a little longer.

Jeremy really wants to go fishing but is so paranoid over losing the spear that he refuses. He stated that’d be a poor reason to get voted out. Actor and writer Mike White seems to bond with him pretty easily, since he’s funny. Minutes after saying that, Jeremy talks about his family and cries. “There’s a real person of depth there,” Mike White says.

Christian can’t help but talk about The Mayor of Slamtown, even though he’s on a different tribe. “I can’t wait to hear what Slamtown is like,” Christian says. The citizens are called the Slamtonians, he decides. Gabby thinks she’s cut from the same cloth as Christian and joins in on the Slamtown chat.

Nick, who’s part of Mason-Dixon with Christian, is hoping he can convince him to vote Gabby out. Simply put, Gabby is d-d-d-d-angerous.

Over on Goliath, Jeremy labels himself as the biggest threat. He sees people strategizing, and paranoia hits. He tells the group that there are a ton of side conversations, and everyone needs to stay strong. “There’s nothing really to talk about until we start losing,” he says.

Let’s talk about Kara and Dan, the romance nobody cares about. Jeremy admits he knows Dan has the idol based on searching around his coat. Suddenly he’s “so shady.” John thinks he’s a little leery by Jeremy’s story. He seems a bit too all over the place right now, and perhaps it’s because he’s spreading lies. 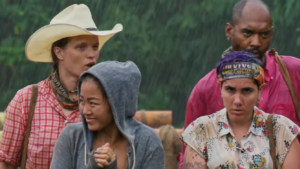 Even though it’s literally pouring down rain, it’s day nine and time for the Immunity Challenge. The rain is so bad that the contestants can’t even see Jeff Probst. “I see more smiles than not,” Probst says. Obviously, they all have a sense of adventure within them.

For today’s challenge, one player from each tribe will maneuver themselves through an obstacle. Then, three contestants will work with rope knots. Also, there’s a ring toss and a puzzle. They’re also playing for reward — and that reward isn’t umbrellas. It’s actually blankets, pillows, hammocks, and chairs, all soaking in the rain and likely moldy. But still, hooray!

The teams are, for the most part, neck-in-neck. David is only a minute behind Goliath when it comes to the puzzle, if that. Christian and  Gabby work the four-piece geometric puzzle. “The puzzle will solve quickly, you can be very close and not know it,” Probst says. Finally, the David’s do it! The win immunity and reward for the very first time and they’re pumped.

Natalia makes no secret in the fact that she thinks they lost the puzzle due to Natalie. In fact, she doesn’t think Natalie belongs there at all. 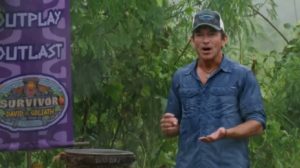 Everyone on Team David is thrilled over their win. Bi noted that she actually injured her knee before Survivor, but while doing the challenge, something popped again. She’s currently wearing a wrap around it, which seems to make her other teammates a little nervous.  Is this foreshadowing!?

Over on Goliath, Natalie is trying to secure her place moving forward, but Jeremy is pretty much telling her she might be doomed here. He thinks she has poor communication skills, overall. “Natalie has been digging her own grave since day one,” Alison said. Her failing at the puzzle, in the end, was just the nail in the coffin. However, Angelina is gearing towards Jeremy. He’s smart, and playing hard, and is already a threat. Angelina tries to convince the other Goliath players to change their vote, and they’re a little wobbly — especially with Mike White, who considers Natalie a “drain” and Jeremy someone he loves. “He is his own worst enemy,” Mike admits.

As for Natalie, she tries to have conversations with people, asking Jeremy to leave. He says openly leaving is a stupid thing to do in Survivor. “Let my last two hours be cool,” Natalie says to Jeremy shortly after. An argument follows. They talk over each other. It’s a mess.

Anyway. It’s time for Tribal Council, and since it’s their first time, Jeff Probst reminds them that fire represents life. Mike White talks about how he slept on a basket as a pillow in the rain, and Jeremy talks about how Natalie was on the outside and was hard to deal with. Natalie isn’t surprised that Jeremy called him out, but she says that it is what it is. But then Jeremy like, freaks out over Natalie and how bad her communication is. She is thrown under the bus, or as Probst says, thrown “under 18-wheelers, one after another!” Truly, I liked Jeremy a lot until this very moment.

Natalie then says she’s open to constructive criticism, which she wasn’t just episodes earlier. Everyone else talks shit on Natalie, just a little nicer than what Jeremy had to say. Natalie states that if she stays in the game, she’s still Goliath strong. The Mayor of Slamtown is only concerned about taking the David’s to Slamtown. Man, Christian must be so psyched watching from home right now.

And holy crap, you guys. Everyone voted for Jeremy. The tribe has spoken, and that’s the second Hashtag Blindside.