This episode of This Is Us seems to be all about education. Or at least, that’s how it started. Before the credits, it shows medium-sized Randall getting into Howard. Then, it shows him taking his kids to school. While he seems excited, the kids aren’t into it. Especially Deja, who finds her school to be too white. She misses the teams at her old school and doesn’t seem all that enthusiastic to start a new club here.

Kevin has a dream where he’s at the movies. To his left, Kate. To his right, his father Jack. Somewhat frozen in time from when they last saw him, yet asleep. He startles awake next to Beth’s cousin Zoe, who he’s continued to date regardless of Beth’s warning. Hey, Kevin is a grown man. Things seem to be heating up since Kevin even considers inviting Zoe to his premiere. But, it’s soon — and, she’s going to Chicago. At the very least, he can drive her to the airport.

Kevin makes sure to reiterate that he’s the king of “cash”. And that stands for casual, not cashmere. Or money. Sometimes that’s tough to tell via a text recap.

Speaking of the premiere, Beth tells Randall during a sensual and not demanding massage that she has to work on Saturday, right before the big day. Randall notes to her that he’d be interested in taking Deja to the community center around that time.

Toby is also excited about the “NYC premiere,” and so is Kate — but she gets some hormonal hot flashes. She tells Toby that she doesn’t want anyone to know just yet about the IVF procedure, except for their Lyft driver. He’s very excited for the two of them, by the way.

After the fire and Jack’s death, Rebecca and the family are in the midst of looking for a new house. Rebecca figures the smaller amount of bedrooms at the house they’re looking at will be fine, since Randall is going to Howard. And Kate might be heading to Berkeley. And Kevin will be… at home, based on his injury. Bummer. But that’s when Kate admits she never sent the tape in. Since it was tied with her father, it kind of makes sense.

Toby, feeling a little shaky, Googles antidepressant withdrawal while visiting with now-old Rebecca. Soon after, they try on premiere looks. Even everyone’s least favorite guy Miguel gets in on the excitement. But in a weird chain of events which involve Miguel and pudding, Kate’s IVF materials fall on the floor for all to see. “I’m a heroin addict,” Toby jokes. Which isn’t funny? The whole scene is weird, and I wish I could rewatch it right this very minute.

And now, a William scene. He checks on a tenant with a crying baby and offers her dinner. He made too much, and she’d be doing her a favor. He learns a little about the tenant. She’s a Nigerian named Chichi, and she was married very, very young. He used to come to her house, and they used to watch karate movies and Walker, Texas Ranger together. “We knew we had to go to Texas, see the cowboys for ourselves,” she said. Unfortunately, he died before they traveled. William suggests that she go to the community center, which is the same place Randall suggested he take Deja earlier. William holds the baby and is told he’s a natural.

Randall ended up telling Beth that he went to the center with Deja, and it was a bit of a dump. Beth jokes and says that that means he’ll probably end up buying it.

Staring at a garden, middle-Rebecca stares in the darkness and hears voices of Jack talking about planting fresh basil. Randall confronts her outside and said that she lied about taking care of things. Kate and Kevin are both messes, with Kevin’s drinking out of control. Ouch. Rebecca, shocked by Randall’s harsh statement, notes that Kate and Kevin are both grieving, and that it’s getting late.

Cut to present day. Miguel chats about IVF success stories in the car. “This is exactly what I was trying to avoid,” Kate said. Rebecca asks her straightforward if they’ve considered the risks. She says she knows the egg retrieval procedure is very dangerous for her size. Silence.

Randall approaches Councilman Brown while he’s at the barber to bring up the state of the rec center. “I’m talking holes in the wall, water damage,” Randall says. The councilman said that the state of the rec center bummed him out, especially since he spent a lot of time at a rec center as a kid. He had to shut his own down based on structural damage, stating he sometimes needs to make decisions that he doesn’t love. Still, he agrees to have a crew out there today — and Randall seems too enthusiastic to be there when they arrive. Bet he’ll be disappointed.

Cut to a scene of middle Kevin falling apart, drinking while overlooking the football field. HIS DREAMS! 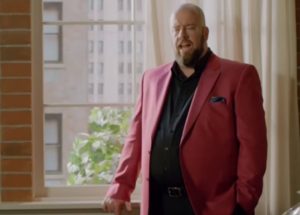 Today-Kevin walks into his family pre-premiere. Rebecca states the big risks to Kate and says it’s pretty foolish to do it when there are so many other options. Kate admits she wants to see Toby and wants to see her dad, and she’s the only person who’ll be able to carry a piece of Jack. Kevin is a little insulted, rightfully.

A verbal fight starts until Toby flips shit. “It’s not about you, Rebecca,” he said. “It’s about me and Kate.” They have every expert in town telling them it’s hard, but they’re going through with it anyway. Kate gives him a kiss, as he steps out and says he’ll meet back up with them at the premiere. Seriously? Go Toby.

At an AA meeting, William recalls meeting Chichi from Nigeria and mentioned that when she said he was a natural at holding a baby, it felt like it was his birthday. That comment was a gift. He notes that even though he doesn’t have a family, he has his community. And that’s something. Cut to middle-Randall leaving a pizza dinner with Rebecca. He apologizes for blowing up at her. “Randall, it’s a struggle for me to get out of bed every morning. It takes every single ounce of energy I have,” she admits. “I know that isn’t fair to you guys, but, I can’t seem to stop it.”

A few months before the fire, Jack took Rebecca to see a new house. She wonders what would have happened today if they chose to buy it. Cut to the garden — he tells her he could grow basil, for pesto. Which he never eats anyway. Kind of sad to dwell on the past. I mean, the crockpot would be in the new house too, right?

Finally, it’s time for the premiere of Hill 400! Kate and Kevin walk the red carpet. Both look a little dejected. Kate apologizes for what she said, and Kevin admitted that thinking of kids makes him physically nauseous. But it was the dad comment — Jack never saw him act. “In a couple hours, we’ll find out if I’ll be taken seriously,” he says. “Now I’m going to do an interview with Mario Lopez.”

On the red carpet, Mario asks him about a lady friend, and he admits he’s solo tonight. Zoe watches on Instagram in another weird scene. Maybe she’s totally thinking twice about this cash arrangement. Again, that stands for casual.

The Mother-Daughter Heart To Heart

Kate and Rebecca talk, and Rebecca offers to administer her IVF shot after Toby is MIA. She admits that after the death of Jack, anything that’d put her kids in harm is paralyzing to her.  “You’ll see when you have kids,” she says with confidence. 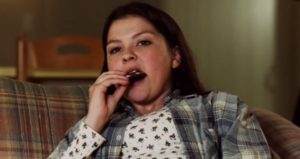 Rebecca feels bad for not stopping Kate when she started gaining weight. Kate admits she was 18 at the time and should have made better food choices. With that, she administers the shot. Fingers crossed it’s not actually Toby’s fake heroin!

Toby meets up with Kate, apologizing for being late and seeing if she still needs her shot. Kate tells him she’s never seen him blow up like that before. She asks why — he states jet lag, we all know it’s antidepressant withdrawal. That Google search told us so!

At an end scene, we see middle Randall calling Howard admissions and saying that even though he already sent in his forms, he won’t be attending college. Instead, he’ll be staying home with his family.

Present day. Kevin sits next to Randall and tells him what happened with Kate, including that “only one who can pass on a piece of dad” comment, and Randall is pissed. Like, straight up pissed. Surely things will blow up next week right before Kate has her dangerous egg retrieval, since this show will do anything to kick you when you’re down.