Welcome  back to Teen Mom OG! But man, things are way different this season. The show starts with one of the actual OGs — Maci. But still, judging by the new font changes on the show, it’s obvious this show is all about starting over. Maci states that even though she co-parents with Ryan, the only person she talks to from that side of the family is Ryan’s mom, Jen.

But, Ryan is still involved. Maci’s super wonderful husband Taylor must have tweeted something that Ryan didn’t agree with, and Ryan literally threatened to kill him. 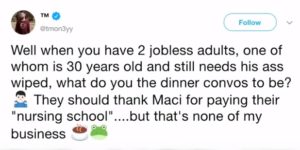 “He’s pretty serious,” Taylor said. “Your son lives here. Who does that?” Maci questions. “I think we should call the cops.” Maci, by the way, is super chill about all this. Something tells me these actions may have already happened.

Next up is Bristol, a mom of three. You probably remember her from being Sarah Palin’s always-pregnant daughter. She’s married to a guy named Dakota, who was the only surviving member of his platoon. I hate to say, it’s weird to see the Palin fam on television, especially since Sarah is just hanging out in mom jeans talking about having fun.

Bristol now lives in Texas. She’s the only Palin who doesn’t live in Alaska, but surprise surprise, her family and friends stop over when the cameras are rolling. Dakota is currently in Kentucky with Bristol’s two girls, who supposedly did great on the flight. Bristol admits that she has a feeling a lot of people will ask her why she’s on Teen Mom. My question is… why Teen Mom OG? Throw her on Teen Mom 2. Bring one of those girls over here.

Anyway, it’s Catelynn’s segment now. It starts out with Tyler tending to a crying Nova. Catelynn is still in Arizona for rehab for her depression. So to fill time, Tyler has a scene with his MAAHHMM. He admits he’s agitated and expects Catelynn home in another 6 weeks. “I feel totally sucked dry,” he admits. His mom relates, as all she did was pick up the pieces back in the day. “It’s hard not to become bitter,” he admits.

Amber and Andrew’s first scene is shot from the bed, which is exactly where they left off last season. She admits that things are pretty good recently, both with Andrew and Gary. She’s excited for the chance to show her mother skills with baby James, as she admits she wasn’t really around for Leah.

James arrived a few days early and texted Kristina about it. Gary said he has no issues visiting. It’s been nice for him, as the pregnancy has caused them to argue a lot less. Born on May 8th, Leah holds him like a champ and it’s damn adorable.

But wait, now it’s time for another new mom — Cheyenne. She’s been on two MTV shows and is not a teen nor was she a teen mom. She didn’t know who the father of her baby was, since she cheated on her boyfriend. But it’s Cory, who she met on a show! But now she’s dating someone else named Zach. Complicated.

Cory comes in with baby Ryder, attempting to co-parent. Ryder is a freaking adorable baby girl who manages to say on camera, “bye Daddy I love you.” Everyone is psyched. Okay, maybe Cheyenne won’t be so bad. Maybe all the scenes can focus on Ryder, though.

As for Zach, he admits she just “wants to be there.” While Cheyenne talks about Cory and the future, Ryder hits her in the face. She tells her daughter how she “just got this hair.” Ah, motherhood.

Cory really does seem like a great guy. He said it was pretty much love at first sight with Ryder, even before he knew he was 99.9% her father. Cory tells the story about how the two had a showmance up until the reunion came around, and that one hookup caused “Ryder K” to come around. What’s the K for? I hope it’s “Karen.” (Actually, I looked it up. It might just be “K.”)

The Latest With Ryan

Now back to Maci, who has both Maverick and Jayde in the tub. During tub time, she tries to teach them about animals. It is damn cute. After that cute scene, Maci’s voiceover says she filed a police report against Ryan. Then, a staged scene of Jen and Larry.  “Apparently there was something on social media, Ryan got upset,” Larry said. “I guess it got explosive… all I can tell you is, it wasn’t one-sided.” At the very least, Larry admits Ryan has made bad decisions. They just want to see Bentley.

Bristol’s daughters are named Sailor and Atlee, and I know I’m going to forget that throughout the season. Every time a Bristol scene comes on, I sigh. Like, Amber had a freaking baby and we saw 2 minutes of it so far.

Speaking of, Amber’s back home with James! And he’s adorable! Amber’s water broke at 10:30 at home and she didn’t know what to do. By 1:39, James was born. “He was ready,” Amber states. She loves how Leah ha been reacting to him so far. Amber sounds different. Like, she sounds normal. Not outraged, or high-pitched. Just like a normal mom.

Not only does Tyler have to take care of Nova alone, but he needs to tend to Catelynn’s horse she spontaneously got. Tyler has been telling Nova that her mom is “at work.” Catelynn calls in, and Tyler states that Callie the horse has been down. She also knows Catelynn is MIA. “You feeling better?” Nova adorably asks her mom on Facetime. Catelynn says she’ll probably watch a movie tonight, and Tyler — bathing  Nova alone — admits that’s “nice.” This is depressing.

Maci and Taylor are heading to court, which means that they’re fighting to keep Ryan away from the two of them, their kids, and their house. Maci, wearing a badass floral print, is nervous. But, they’re pleased with the outcome. They got what they wanted and what’s best for Bentley. Maci gets a little choked up, saying that the order is for the two of them, the other kids, and the dogs. He can still see Bentley and be a father and show up to his games if he actually wants to. But if he screws this up, there are no more chances.

During Cheyenne’s final segment of the night, Ryder eats blue chalk and it’s a bit much but also hilarious. The chalk incident happens while Cheyenne and Cory talk about Zach. Cory admits he’s a little bit jealous since Zach gets to see Ryder more than him. “Why don’t you just be single?” he asks. Then he laughs and apologizes, saying he had a thought and didn’t know what came over him. Supposedly Cheyenne calls Cory to cry about Zach.

Now, more Bristol. Ugh. She’s turned into the person on the show I don’t care about at all since it’s just her talking to her family about weddings. Bristol said she was super independent before marriage, but then she lost all that. “His PTSD is really affecting our marriage,” she admits.

Amber and Andrew are being cute together, making hamburgers and hot dogs. Andrew admits he never thought he’d have kids at this point in his life, but is really enjoying  it and has no problem with feedings and waking up. He’s still set to go back to LA for the summer. He says that his differences with Amber spice life up, but says that everything is good. “This is my family,” he says, saying things are rock solid. Yo, I like this dude.

Talking to Kim, Tyler admits that Cate has just been watching movies all night. Kim asks if he gets depressing imagining her watching movies in a robe all night. “It’s not depressing, it’s repulsing,” he says. Kim admits she’s losing empathy for her. OUCH. Tyler really does look done. I feel for him. It’s hard to parent alone.

Cory brings flowers, and they’re for Ryder. Cheyenne thinks they’re for her. Then, they all go to MyGym. Which is unreal, since I take my kid there. It’s a fun time, but they made it seem like an extremely  fun time since they got all of Ryder’s best  gym moments. Trust me, kids break down there a lot.  Cheyenne talks to Zach and tries to talk about the Cory insecurities. Can they make this work?! Looks like we have the whole season to figure that out!

Back in Texas, Bristol is watching Sailor play soccer. Husband Dakota is wearing the same shirt he’s been wearing this entire episode, so either this is all staged or this OTD shirt is the new Belden Lineman. For the record, his anxiety has been through the roof recently. He brings this big fight up in front of the kids, in the car. “It’s not something that’s hereditary,” he says, saying that he sees his dead guys every night in nightmares. Woof.

Maci talks about what happened at court with someone who’s name I didn’t catch, but — she’s wearing a TTM pocket shirt. Maci seems worn out over the ordeal. “We just, we didn’t want to shut the door on Ryan’s ability to be a parent,” she says. “If he doesn’t, it’s not because we weren’t allowing it.” He can’t call, text, email, or anything.

Tyler goes forth in setting up an appointment with a new therapist named Joelle. Tyler admits to her that while he talks to her on the phone every day, he finds himself sighing a lot. He thinks that Catelynn is impulsive, and does the things that make sense to her without thinking of anyone else. If she wants a pig, she buys a pig. If she wants a horse, she buys a horse. If she wants to leave for months, she goes and does it. Tyler admits he’s had some scary thoughts in his head. He needs something to change in the relationship. He hasn’t been happy in the relationship for “a couple years.” They got married in 2015, which makes that even more sad.

Cheyenne brings up the Zach fight, regarding the gym class. “I’m literally thinking like, we don’t need three parents on the floor,” she says. He’s technically like the step father, but… not really let. As for Cory, his buddy Nelson thinks that maybe Cheyenne doesn’t realize how much she loves him yet. “She wants a family,” Cory admits. “I think it eats her up a bit that I’m not ready.” 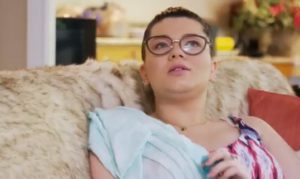 Back to Amber. She’s psyched that Leah gets more time with baby James. And things really are lovely and drama-free. Kristina even gets them a personalized pillow! “It’s amazing,” Amber says when asked about Andrew. Her big concern is Leah. “I still feel really horrible about things that happened with Leah,” she admits. “Why couldn’t I be sober.”

Creepy Dakota is still wearing that same dumb tee in his last segment. The PTSD argument happens again. I feel for him, I do. What he went through was insane. But, he’s still uncomfortable to watch. This has nothing to do with being a teen mom, so it seems a little exploitative.

But, his fighting is where this hour and a half episode ends. Maybe even more Maci next time?