Welcome back to Survivor! Right after the last blindside, Alec admits to Kara that he felt like he needed to make a big move, but he still sees the David’s as extra votes — not actual team players. Still, Kara is a little pissed off. She was blindsided, after all.

Speaking of paranoia, Gabby thinks that the game can be taken away from her at any moment. Even though she kicked ass at the last challenge. Natalie, who’s thankful to still be at the Jabeni tribe, admits she absolutely loves the severe storm that’s happening. Her teammates are a little less impressed, especially since rain pretty much means they can’t eat. Also, things are flooded. “Everything is soaking wet and everyone is freezing,” Slamtown says, interviewed from the other side of the island. “This is undeniably crazier than everything we’ve seen.” 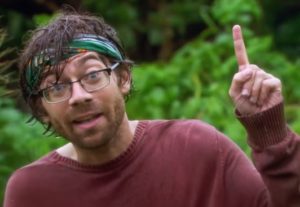 Storm or no storm, tree mail still arrives. They’re being evacuated and will return the second that weather permits. Looks like it’s a strong cyclone, meaning their camps will probably be destroyed. Christian, my boyfriend, says that this is an insane season due to the fact that they’ve faced one catastrophe after another. “We’re all Davids today,” he says. Then, he points to the sky. “That’s the Goliath.”

After the evacuation, all three tribes see their shelters destroyed. Over on Tiva, they’re quick to try and rebuild. “I feel like I have lived a lifetime out here,” Alison says. “It just speaks to the crazy nature of this game.”

But enough about that. Now it’s time for the Reward Challenge! Probst mentions the turbulent weather and turbulent gameplay before describing the challenge. It’s all about poles, sandbags, and a giant slingshot. First two tribes to finish and knock down the targets win chickens. Four egg-laying hens and one rooster for the winning tribe, and just a dozen eggs for the second place tribe. Obviously, this would be a huge-ass prize.

Lyrsa is in charge of untying knots for Jabeni, and she’s quick with it. Pretty much all three tribes are at the slingshot at the same time, with Vuku slightly in last place. But they quickly end up in first place with a quick target down. Jabeni ties it up, meaning they both just need one to win. It’s Elizabeth from Vuku who gets it first. Good for them.

Tiva eventually gets one in, meaning second place is still anyone’s game. But it’s Jabeni who gets it, meaning they’ll be going back to their pile of sticks with a dozen eggs. Gabby is a bit worried about her tribe’s confidence since all their losses could mean that she gets voted out. No shit, Gabby. Stop talking about it!

Psyched about their chicken, Kara wants to blindside Alec, since she no longer trusts him. But in Elizabeth’s eyes, it’s obviously Kara that needs to leave. She’s a straight-up Goliath.

Since Angelina is a vegetarian, she hasn’t had any protein in two weeks. So, she’s excited about her egg prize. But Natalie wanted to boil all of them and eat them immediately. That makes no sense, since there’s no refrigeration on the island, and the eggs will go bad. “I really don’t get this woman,” Lyrsa says. So, yeah. Natalie gets a second chance and she’s ruining it. Even Mike White, who loves everyone, is annoyed. He’s very much looking forward to a Natalie-free Survivor experience.

Christian learns that he was just added to a group called the Brochachos. It’s bros. But Gabby isn’t a member, since she’s not a bro. In fact, the Brochachos (minus Christian) are hoping she’s the first to go home. But they just want to make sure that she doesn’t have an idol on her. Dan goes to look just to make sure, and finds an idol clue. So, he could possibly get two. And speaking of…

Hey, it’s time for the Immunity Challenge! When Jeff Probst asks if everyone’s ready, one of the girls says “yes” which is oddly comical. It’s a physical challenge and then a puzzle, like all of them! It also involves pulling a rope to lift a bridge. Tiva and Vuku are in the lead, while Jabeni (which I will always think of as “Jabroni”) has trouble with the aforementioned bridge. Natalie falls! Not a surprise.

Nick, Alec, and Christian are in charge of their puzzles. The puzzle itself look like a snake, and Christian seems to be closer and closer to solving it. But, it’s anyone’s game. “This is Survivor at its finest!” Probst says. Tiva and Vuku manage to win it, sending Jabeni to tribal for the first time. I bet Natalie’s out. Just a guess.  Lyrsa says that it’s possible that outside the game, Natalie is an adorable lady. But inside the game of Survivor, she’s not. 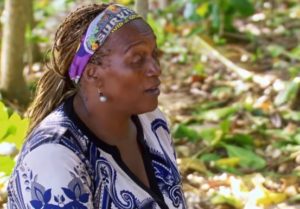 Natalie chats with Mike and Angelina, and the three of them decide on Lyrsa. But later, they wonder if it should be Nick, since he has a jacket they’d like to steal. Natalie straight up asks him if “that jacket is worth a million dollars to you.” Mike pulls Nick aside, and says it’s clear that Natalie needs to get out of here. They just need to get Angelina on board. “All I want to do is go far with people I like,” Nick tells her.

Here’s the thing that’s making everyone nervous. Since they got rid of Natalia last week, they fear that getting rid of Natalie, another Goliath, might be a big mistake. It’s not, you guys. She’s a bully.

It’s time for Tribal Council. Natalie believes that they’ll still be Goliath strong, and has no idea why she always seems to be struggling. “I am never the center of drama,” she says. She describes herself as being laid back. “It doesn’t take five people to decide on boiling eggs,” she states, referring to the great egg debate. Mike White admits that Natalie has a lot of opinions on things that happen on camp, and that takes her by surprise. Even so, the Goliaths all try to make it look like they’re all cool with each other.

Then, the jacket gets mentioned. “Natalie was trying to help me out,” Angelina admits. She says it came from a bright place, since Natalie knew she was freezing at night. “I think that it came from love.” Jeff Probst, who’s witnessed every Survivor personality ever, eventually admits that Natalie seems like she always just needs the last word in these debates. She denies that. But whatever, it’s time to vote!

First vote goes to Natalie. Second, Lyrsa. Back to Natalie. Back to Lyrsa. There’s only one person left — and it’s Natalie. Everyone seems shocked, and Lyrsa is relieved. Angelina gives Natalie a hug. “Is there any way I can have your jacket?” she asks her later, but nope! Natalie ignores her and storms on off.  It was pretty petty and awkward of Angelina, but hey. Good riddance, Natalie. “Worth a million dollars,” Nick jokes.

Who Would You Have Voted For?