At the very start of Survivor — or at least three minutes past 8 PM, since that’s when I tuned in — Bi leaves the game. And like, wait. I know she had a hurt knee, but okay. The next surprise is that Jeff Probst splits the teams into three tribes. Except for Carl. Carl has no tribe.

The orange tribe is now called Vuku. It consists of three Goliaths and two David’s. The green tribe is named Tiva. Like, female for Tivo. They also have three Goliaths and two David’s. The third tribe is Jabeni. Same breakdown. And then, Carl. Carl gets to go to Exile Island. He’ll return at the next Tribal Council and will join the losing tribe. Sounds like a rough day or two for Carl.

As Christian said, it’s bad for David’s since they’re the minority in every single tribe. Seriously, Probst. Dick move, bro.

Vuku gets to know each other a little better, and things seem cool. Until Davie mentions that it’s kind of effed up that Team David got so screwed. For Davie, it’s time for him to bond with his new predominantly white tribe. “I am a black nerd,” he states. “Hopefully I’ll be able to fit in.”

Elizabeth talks to the girls about horses. Natalia thinks Kara is getting along a little too well, and she’s simply not okay with it. Kara told Natalia not to worry — she’s not going to jump ship. 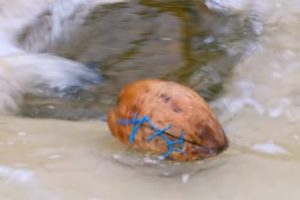 Over on Exile Island, Carl walks the beach. He’s a truck driver, so he’s been alone before. But never this alone. He gets a riddle and learns that a coconut near the beach may have a clue hidden inside of it.

Tossing coconuts frantically, he even dives into the ocean. “There’s tons and tons of coconuts,” he admits, trying to gather them all. “This ocean ain’t nothing to play with.” He finds it!  It’s a coconut tied back together in a crappy manner with a blue string.

His advantage is kind of cool — it’s a nullifier. If he knows someone who’s playing an idol, he can write their name down and block it.

Over at Jabeni, Mike White thinks he’ll be seeing Tribal Council a lot in the next few days, since they’re a bunch of losers. Still, the Goliath’s are in control, even if those Goliath’s include Natalie. She tries hard to boss around her new tribe since that worked so well last time. Angelina is not here for it. Nobody is. She’s just so damn unlikable. “I saw a crack and its name was Natalie,” Nick says. “It’s almost like sweet music to my ears.”

Nick sees an opportunity to work with Mike White, and Mike White is ALL ABOUT IT. As a big fan of Survivor, he really seems to pretty much align with anyone. I bet if I called Mike White right now on a coconut phone and asked him to make an alliance with me, he’d be like, “Sure!”

Now let’s talk about Christian, who is trying hard to help with bamboo. He’s on Tiva and feels like he needs to bring about the charmpocalypse to stay in this game.  He immediately talks to Slamtown, who tells him everything he needs to know about Slamtown. Supposedly the Slamtonians are all people who’ve been Slammed by Slamtown. It’s a quirky and amazing conversation, and I wish I was there. 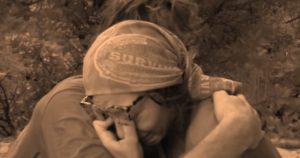 Gabby is on the tribe with Christian, and his instant chemistry with Slamtown is making her feel a little unsure about herself. “I’m not happy with how things turned out,” she cries to Christian. “I really feel like I’m on the outs,” she sobs. Get it together, girl. Keep it up and you’re going to get a crying montage during the reunion.

Christian is totally fine drying her tears and keeping her in the game. “I don’t do well around these Goliaths,” Gabby sobs. Which is interesting, since I feel like they probably didn’t know the premise going into this, right?

Anyway. It’s Day 11, and time for the Immunity Challenge. Jeff Probst calls all three tribes in and grabs the idol back from Kara. Two tribes are winning today.

It’s a blindfold challenge! The caller will need to guide their tribe through both a maze and a puzzle. In addition, they’re playing for a reward — the first tribe to finish gets brownies. Also, coffee and iced coffee. Angelina talks to Nick and Natalie as she’s being wheeled in a barrel. Oh yes — the caller is right next to them throughout this, and not yelling on a platform as per usual. Gabby goes through first for Tiva and starts guiding the puzzle.

Gabby wins it for Tiva and wins the brownies. The purple tribe is close in second, but it’s anyone’s game. Wait, no. It’s purple. Jabeni is safe, and Vuku is going to tribal. I still don’t know who’s on what tribe, so. Who knows what’ll happen. At least they get Carl.

Elizabeth and Davie freak out a little bit, and Elizabeth runs to get an idol. But Davie knows she won’t find it. Because he has it. Davie tells the Goliaths all about Elizabeth since he wants to work with him. “Elizabeth is a threat to me,” Natalia states. “She’s talking about voting me out.”

Elizabeth’s technique is to bond with a Goliath, and she chooses Alex. She even notes that she’d be willing to vote out Davie, which is dumb. It’s a bummer the David’s can’t even stay together. Alex thinks Davie is a bigger threat, but is bummed since Natalia always has to have her way. “Working with her…difficult,” he says. Natalia even snaps at Alex and Kara, which makes her a target. Alex is on the fence and admits that it’s going to be a situation he figures out while at tribal.

Carl joins the group, but only watches the challenge from the sidelines. Elizabeth is very concerned, even admitting she was about to poop her pants. She hopes the tribe will give her some time, since she’s loyal. Davie also says that Elizabeth would be tough to beat in the finals. Meanwhile, he was blindsided on the first vote, meaning he’d be way easier to beat.

Natalia says that the way to win Survivor is to make big moves, and Alex is all ears. Suddenly, Alex gets up and whispers to Elizabeth. It almost looks like he’s making out with her ear. This makes Natalia super uneasy, as this has nothing to do with “the plan.” Yo, Natalia needs to leave. Alex also whispers to Kara, who in turn, whispers to Natalia.  Nobody talks to Davie. Natalia and Kara have a silent fight, with captions, which is kind of cool to see. In short, Natalia thinks it’s her.

Probst goes to tally the votes. Nobody plays their idol. The first vote is Elizabeth. Then, Davie. Then, Natalia. Natalia gets two more, and she’s livid. “I knew it, I knew I couldn’t trust you,” she says. Good riddance. She asks Kara if she knew, and Kara swears she didn’t. But her smile might say otherwise. “There’s always an opportunity for a big move,” Probst assures them. Hey, maybe Team David isn’t dead after all!