Previously on This Is Us, Jack went to try and save Nicky, and Randall gives Beth a job on his campaign. Also there’s a bunch of William stuff from season one. But now, a scene with Jack and Rebecca — it’s the last Thanksgiving where, in their eyes, the kids will be living with them. Rebecca says she feels like a traitor since Miguel is coming over, and he just divorced her best friend. What!

Rebecca says maybe he wouldn’t be alone if he tried hard to save his marriage. Man. If past Rebecca only knew. The Big Three is busy laughing in the living room at Randall’s college essay topic. It’s about the one person who made the biggest impact in his life. Laughter, goofs, and football tossing follow,  until Miguel arrives at the front door yelling at Shelly on his cell phone. “She hung up on me,” he says. “Happy Thanksgiving.” Screw you, Miguel! 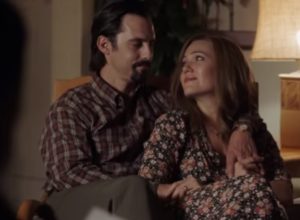 Miguel agrees with the family in saying that Randall should write about the fireman that found him. But, no. But upon seeing the funny family moments, Miguel needs to leave for a second. He has kids too, by the way — and I guess the Pearson glee gets to him. “Your kids can’t be turned against you Miguel,” Jack says, after chasing after him. Miguel admits he wasn’t there for Andy and Amber the way he should have been, based on work. “You could have been a more present father,” Jack admits. “You wanted to provide for your family.” He tells Miguel that he doesn’t want to be 65 and not know his grandkids.

Next, we see a shirtless present-day Randall. Ow owwww. Beth talks to him about the campaign, and per Randall, she’s had plenty of great ideas and even looks great in a soup kitchen. Even though Kate if “IVF-ed up” and Toby is getting back on his feet, supposedly they’re planning the big meal. Hey, remember Deja? She gets a Thanksgiving Day text from her mom that she promptly deletes.

Kate and Toby arrive and they’re all ready. Kate will be cooking a 15-lb Butterball using Snoop and Martha’s recipe, and they have no problem watching Tess during the process. The rest of the family heads to the soup kitchen to help out. The other guy that Randall hired is kind of upset by his choice of location, and the fact that Randall hired his wife on, who’s never been on a campaign before. They reiterate to the dude that he’s here to make a difference, and not have a photo op. And Beth’s on the campaign no matter what.

Deja, helping out, has a flashback. Not that long ago, she was on the other side of the line — and remembering how it felt, she’s a little more generous with the cookies.

I had to Google the name of the campaign manager, and it’s Jawan. At least, I think so. Since like, the second result was this very site. Note to self: look at credits for actual spelling of important character name. Jawan, for the record, is disagreeing with pretty much every move Beth makes. Beth is more for the people. Jawan is more for the vote.

Back To (War) Jack

Now, a Jack war scene. Even though Nicky is being a dick, Jack still invites him to a Thanksgiving celebration. He gets asked about Nicky when everyone’s chowing down, and even though Jack says he’s fine, his war buddies tell him that’s definitely not the case. To get away from the conversation and be a help, Jack helps a woman nearby with two buckets. THE woman. Someone takes a picture, since Thanksgiving.

Later on, he brings her food that he prepared and asks her about her sick son. He begins to undo a foot wrap to reveal a nasty cut. Jack storms out to find Nicky and show him. “He’s burning up,” Jack says. Nicky claims she’s not going to help the kid, but Jack states that cleaning and bandaging the wound is an order. As Jack tries to disinfect the wound, Nicky seemingly can’t take it and leaves the area.

“He’s just a kid, Nicky,” Jack laments to him. Nicky tells him some bloody horror stories involving chickens in return. Long story short, Jack can be nice to them, but they’re more than just women and children.

Now a William story. I think this is how he meets his boyfriend? He’s playing piano, and Jesse swings by to enjoy it. The two see each other again, after William  sees Jesse buy some cheap wine. They get dinner together and William hears his story of addiction. But, he fabricates some of it, which William calls him out on. Turns out, Jesse just loved cocaine until he learned that smoking crack was cheaper. “Also, I was never a bond trader,” Jesse admits. But his marriage was complicated and mismatched — that part of his story was accurate. “I don’t know why Thanksgiving depresses me. It’s not my holiday,” Jesse admits.

Back to Kate and Toby. Toby’s working on cranberry sauce based off of Randall’s 30-ingredient cranberry sauce, which includes fresh mint from his garden. Toby panics for a little bit, until Kate gives him a pep talk and says this celebration will be about them, and not everyone else’s standards. Then they cheer for Katoby.

Then, Toby walks in on Tess maybe getting her first period, and he calls Kate in to help. She knocks on the bathroom door and Tess says she’s “fine” but to leave her alone. “Is this your first one?” Kate asks. “Did you call your mom?” Eventually, Tess accepts Kate’s help.

Tess is still a little embarrassed to face Toby. Kate confides in her that she actually had the most embarrassing period. It was in front of Amber and Andy, Miguel’s kids. Kate tells Tess that she can talk to her about anything, like her first kiss or first boyfriend. “Or girlfriend,” Tess quietly says. Aww, Tess.

Old Miguel and Old Rebecca are listening to an audio book on the way to Thanksgiving. They’re heading to see Amber and her adopted son. Miguel thinks the only reason they were even invited was because Shelly couldn’t make it. Rebecca is looking to spending time with Miguel’s family, even though it’s awkward as hell.

Kevin’s latest movie is the next topic of conversation, and Rebecca says it’s quite good, even though Miguel’s kids make sure to tell her the reviews are “mixed.” Rebecca fires back with a Rotten Tomatoes percentage. After finding out a dish has nuts in it, they excuse Rebecca of trying to kill a family member. Miguel thinks it’s time to step in — he barely even got an email back from his kids after the split, so he gave up.

Miguel mentions that they found each other ten years after Jack’s passing and soon after Shelly remarried. “You show my wife some respect,” he states. Hey, first time I like Miguel!

Back at the Pearson house, Kate promises Tess she won’t tell her secret. But says her parents will love her no matter what, so she shouldn’t be afraid to be open about it. Cut to Randall’s essay. It’s that nobody can be his MVP. Especially since you meet so many new people, who all start off as strangers. (But if he had to choose one, it’s the fireman.)  Including the woman Jack helped, who gifted the necklace to thank him for helping her son. Deja also reaches out to her mom to wish her a happy one. What a heartwarming yet mysterious way to celebrate the holiday.