Well — Mike White, who finally seems to be playing the gane, airs his reserves against Gabby, which throws Christian off a little bit. But hey, at least he told him. Davie knows that the David’s still need numbers, so he goes out to look for an idol with Nick. What they do find is a weird colorful picture. It’s a clue! So, they need to start looking around the island. It’s pretty easy to find, as the image is a palm tree coming out of a cliff.

Even though the other survivors know nothing about the clue, Davie and Nick still try to be sneaky. They get their clue when everyone’s back is turned,  and the advantage is to steal a vote. They’re ecstatic. Especially since Carl also has an Idol Nullifier. “This could be the stone that goes right through his head!” Nick said, in regards to taking out a Goliath. Also, Davie has a secret idol. Go Team David!

But now it’s time for the reward challenge, so let’s see who’s still celebrating. The individuals will split into teams for this one. It’s all about keeping a sandbag steady, and the winners get a dozen pizzas. “Maybe after 21 days, you guys have actually forgotten what pizza tastes like,” Probst says. He lets the remaining 12 enjoy small bites. And thankfully, everyone shares.

Each sandbag weights 10 pounds, and while they can switch hands, they can’t drop the bag. Every time a team member is out, the weight is heavier for everyone else. And after every fifteen minutes, a teammate needs to voluntarily leave. Gabby is one of the first. Christian drops out during the second go-round. Unfortunately, after acting a little too confident, Dan drops one of his bags and his team is out. He’s pretty pissed off.

Mike White snips back at Jeff Probst with “We’ve got nothing for you, either!” after Probst says his line and sends him back to camp. It’s pretty funny. Probst is just happy that someone finally vocalized how everyone has felt all these years. Oh, Ned Schneebly. 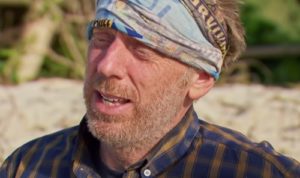 Angelina thinks it’s pretty sad that the pizza and sodas are literally right in the middle of the camp. The losers are going to kill a chicken to eat. Mike White realizes now that he’s not actually here for the rewards — he’s here for the game itself. He’s worried that if he continues on with his six, the David’s might screw him over. He’s especially worried about Christian, as he’s smart and can pull moves that nobody will see coming. He chats with Alec, who sees his point but also doesn’t want to get locked in with the Goliath’s.

As for Angelina, she’s really pissed because this was her idea, damn it! Mike White is trying to take credit!

But, now it’s time for the Immunity Challenge. I really want Christian to win this, since I don’t want that dude going home. This challenge requires a buoy and balance. Christian immediately has a rocky start. “We’ve done this challenge one time,” Probst says. Brad Culpepper won it in just 23 minutes.

Kara is the first person out, followed by Christian (no!) and Alison. Davie drops next, followed by Slamtown. Pretty soon, only Alec, Mike, Angelina, Dan, and Nick are in. Alec loses his balance and then Mike is unable to recover. In the end, it’s between Angelina and Dan. Eventually, Angelina drops, meaning that Dan is safe. That’s likely not the outcome Angelina wanted. 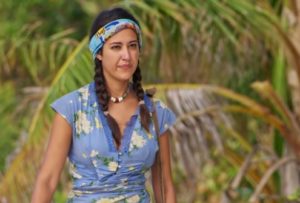 Slamtown says that the David’s are going to go through a huge shock tonight. “Tonight’s going to be a hashtag Brochacho  Blindside,” Slamtown says. The David’s think that Angelina is going home. And she’s afraid since if something happens, she’s the next on the chopping block. “I would love to get Angelina out,” Alec says. “But if everyone’s going to vote for Christian, I’m going to have to go with it.”

Nick hears about the blindside and doesn’t know why Mike is so set on voting Christian out. Nick tells Christian he’s being lied to. Nick asks Davie if he’d use the advantage to save Christian. He was hoping to save it, but he doesn’t want to see Christian go. “The only thing that can save him for sure is the hidden immunity idol,” Davie says. The thing is, nobody knows he has it.

It’s time for Tribal Council. Mike says that David’s were involved in Elizabeth’s vote, and Davie says that Elizabeth did them a big favor last week in exposing cracks. Carl says it’s more about votes, and how you never actually know who’s pulling a fast one. Slamtown says he doesn’t know what’s happening tonight, but that he’s all about voting out threats. Christian thinks he’s worried that he’s the obvious target. “They called me Big Bang Theory,” he said,  reflecting on episode one. Angelina thinks that Christian’s big connections will make him a bigger threat. Shut up, Angelina.

During the immunity idol talk, Davie walks up and says that he’s nervous but more nervous for Christian. He plays his idol. Angelina panics, and asks Dan for his idol… but, he stays stone cold. “Dan, please. Please,” she says. Dan stands up and says he wants to take care of his alliance too. He plays his idol for Angelina. So, votes counted towards both of them won’t count. Christian would have had seven votes, and Angelina would have had two. But then Slamtown gets two votes. What? Well, the tribe spoke. Everyone seems to be really sad that he’s gone, and he’s obviously pretty beloved. Looks like he had his own Brochacho blindside.